Is a Fixed Wireless Internet Provider Right for You?

You might have seen recent references to a “fixed wireless internet provider.” Maybe it’s one of those terms that enters and exits your consciousness quickly, and you aren’t sure exactly what it means. No worries. We’re going to fix that, and it won’t be painful.

We’ll delve a little deeper into precisely what fixed wireless technology is and how it works, but for now, keep it in your head that it doesn’t include satellite providers like Hughesnet or Viasat.

The more pressing question is how to locate a fixed wireless service provider in your area and why you might want to. 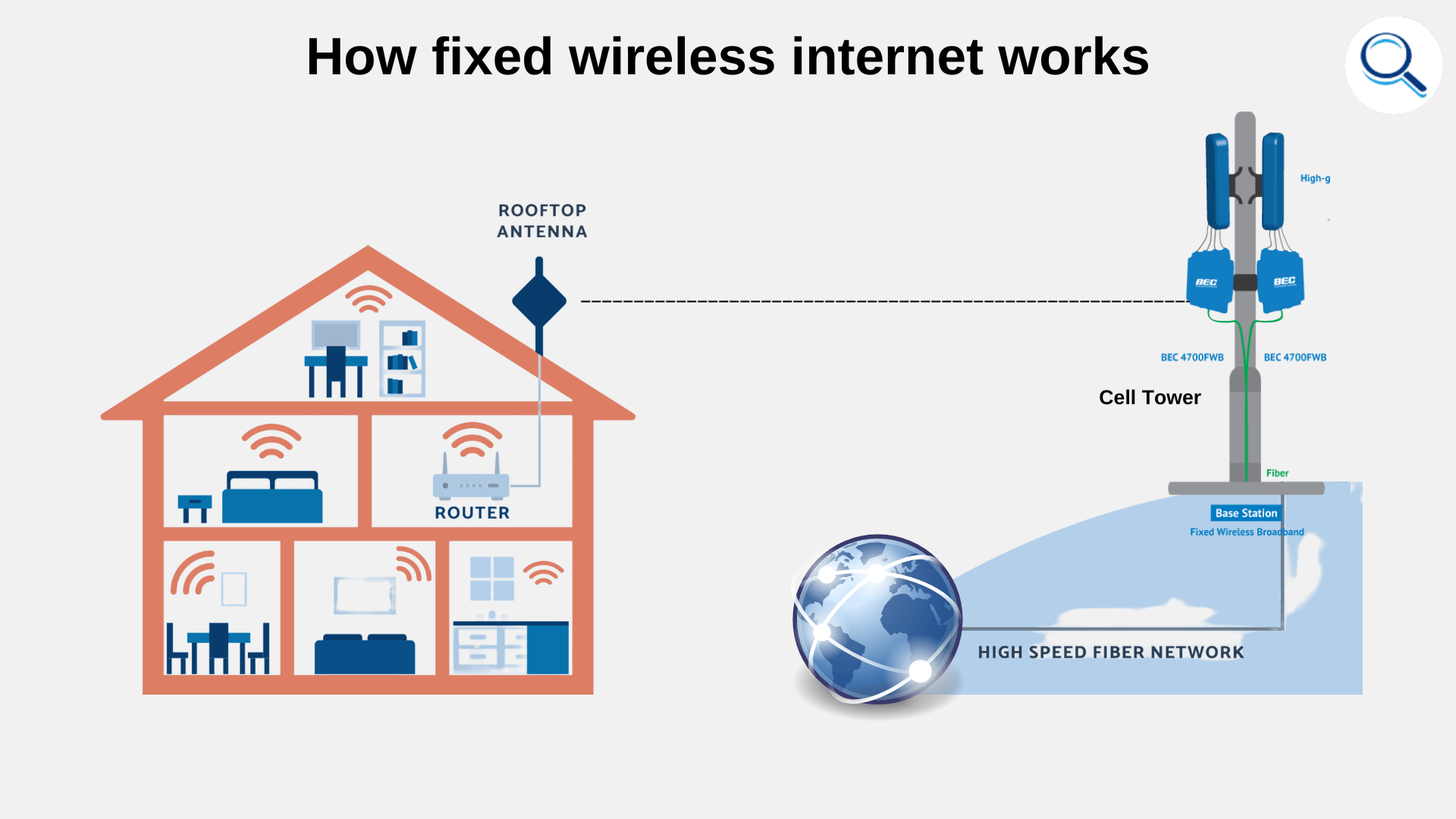 What is Fixed Internet?

Before you run off and sign up for the first fixed wireless internet plan you stumble across, it would be a good idea to know exactly what it is and whether a subscription would improve your current online situation.

The farther you live from an urban area, the fewer internet options there are. Get far enough out; all you can hope for is traditional satellite internet like Hughesnet or a newer model of satellite access like Starlink. Consumers have come to expect higher prices, slower speeds, and weather-related service interruptions with these. 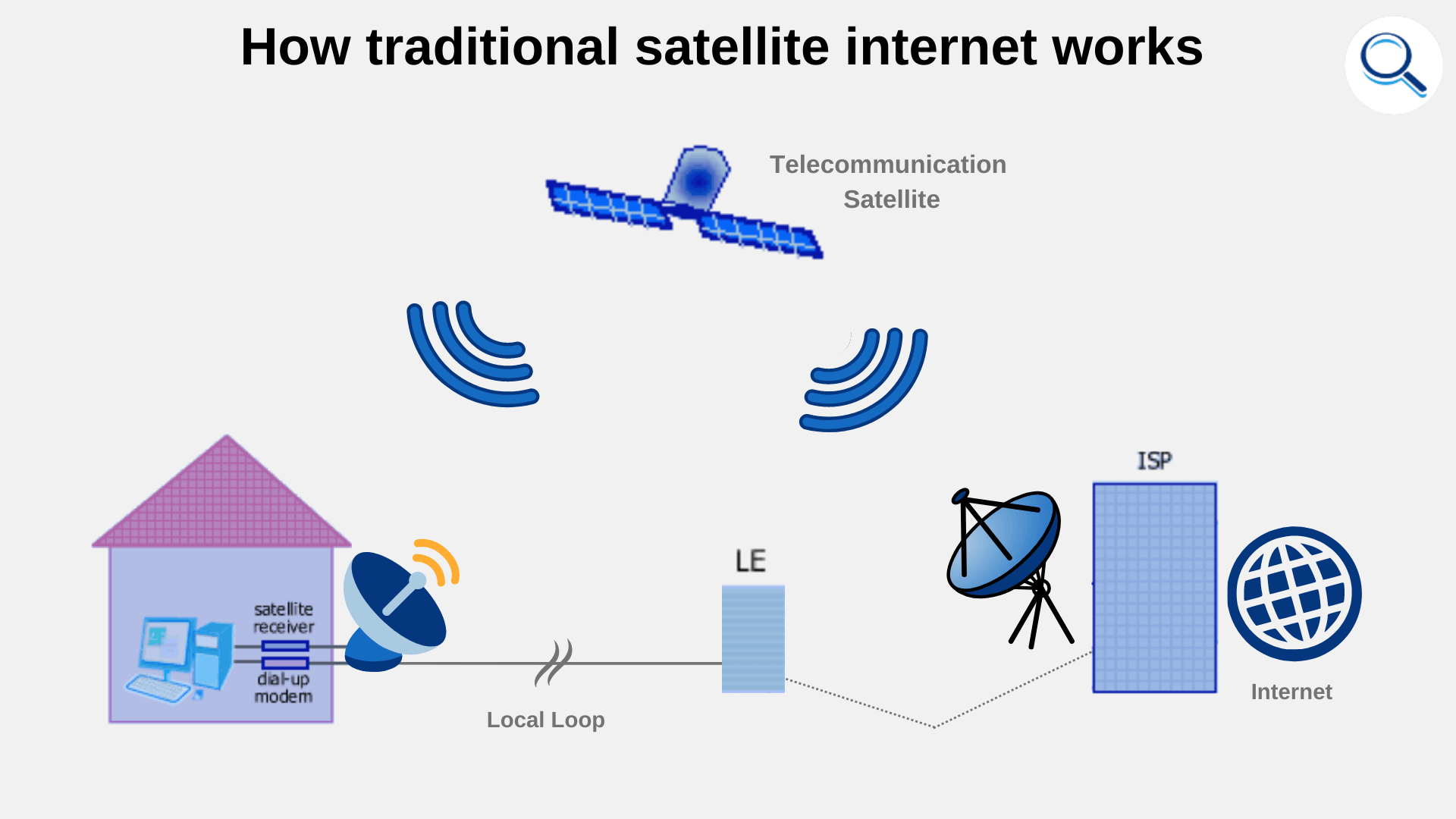 However, if you live closer to the cusp of civilization - in other words, not in the deep woods - fixed wireless internet might be a legitimate choice. For some, this type of service is the only type of broadband available in areas where wired service like DSL or fiber is not yet available.

Here’s How it Works

Since fixed wireless internet is a wireless system, equipment must be installed on or near your house to establish an internet connection. The process goes something like this.

Fixed wireless installs an antenna that looks like a small satellite dish on your house or maybe on a pole in your yard. This is how you’ll receive your internet signal via radio waves, typically from a nearby tower. The provider might add this capability to an existing cellular tower or build new dedicated towers to provide fixed wireless service.

As mentioned, a receiver that is physically smaller than the kind of receiver typically associated with satellite service is installed in your house. This receiver functions as an antenna as it communicates with the base station tower to establish the data stream that is your internet connection.

At this point, all that is left is to send the connection received wirelessly from the tower into your house for use on all your devices. This part of the process works like a traditional satellite setup with the antenna connected by a wire to a modem inside the house. You set up your local wifi network as usual and can then go online.

How to Find a Fixed Wireless Internet Provider in Your Area

Later, we’ll address the advantage and disadvantages of fixed wireless service and which are the most important considerations that might encourage you to switch from your current plan. For now, let’s talk about how to find a provider in your area.

Note that there aren’t many of them yet, as the infrastructure is still being developed. Here’s the short list of cellular service providers that also offer fixed wireless internet service:

Keep in mind that this is a relatively new service, and additional providers might enter the market anytime. There are already a handful of companies offering the service who aren’t affiliated with a phone company.

Also, just because four major phone companies are offering this service doesn’t mean all of them offer it in your area right now. Begin by visiting each service provider’s website.

There should be a conspicuously-placed box to enter your address. You’ll soon know whether you can get fixed wireless at your home or business.

It can also be helpful to visit a site like InternetAdvisors.com. This directory of internet providers shows which offers services in your zip code. It’s an easy way to narrow the field quickly. Included with the site is a coverage map of your area.

First, let’s look at the pros. 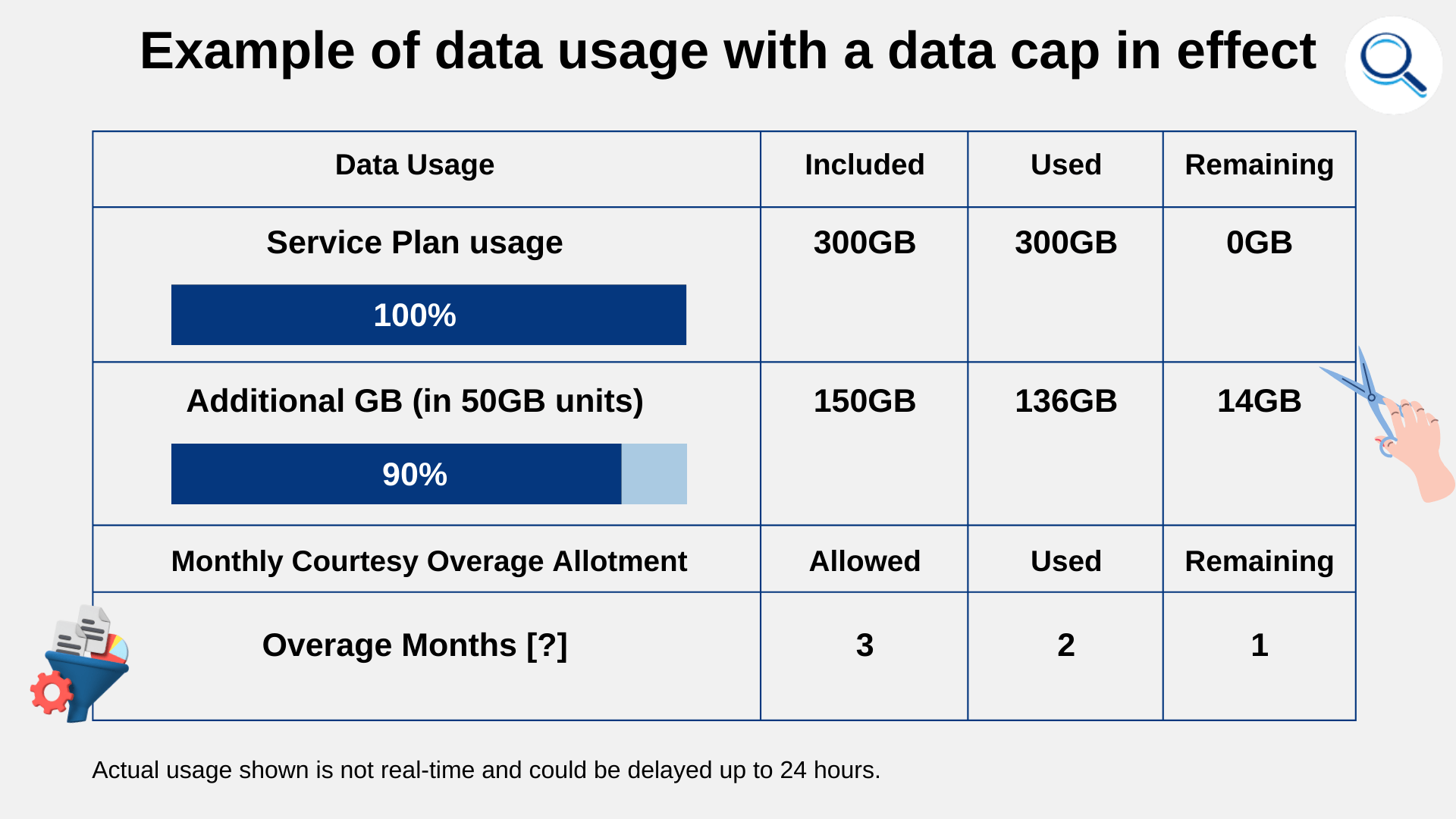 As with satellite internet service, weather can play havoc with the signal. Rain, fog, snow, ice, etc., can obscure your signal until conditions clear up. A light rain might slow your connection. Heavy rain could kill it completely.﻿

Should You Switch to Fixed Wireless?

A fixed wireless internet provider might be your only broadband option if you live far away from an urban area. And even if there are other options like DSL, cable, or fiber optic, a fixed wireless plan might come with a lower price tag if you don’t need a huge amount of bandwidth.

Another point to consider is that fixed wireless speeds tend to be inherently slower, no matter how much you pay. Some connections land in the 25 - 50 Mbps range, which is fast enough for most people who spend most of their time online just browsing or checking email.

If you’re a heavy-duty gamer, download large files, or like to stream 4K video, a fixed wireless setup might not be the best solution. Consider exactly how you spend your time using the internet before you decide.

Fixed wireless internet is likely not the first type of broadband that crosses your mind, but it can be the best service solution for specific situations. We’ve covered the considerations in this article. Let’s review.

If you can get a fiber optic connection, do it. You won’t be unhappy. After that, fixed wireless might run against other types of broadband before the traditional data-cap-mad satellite industry. 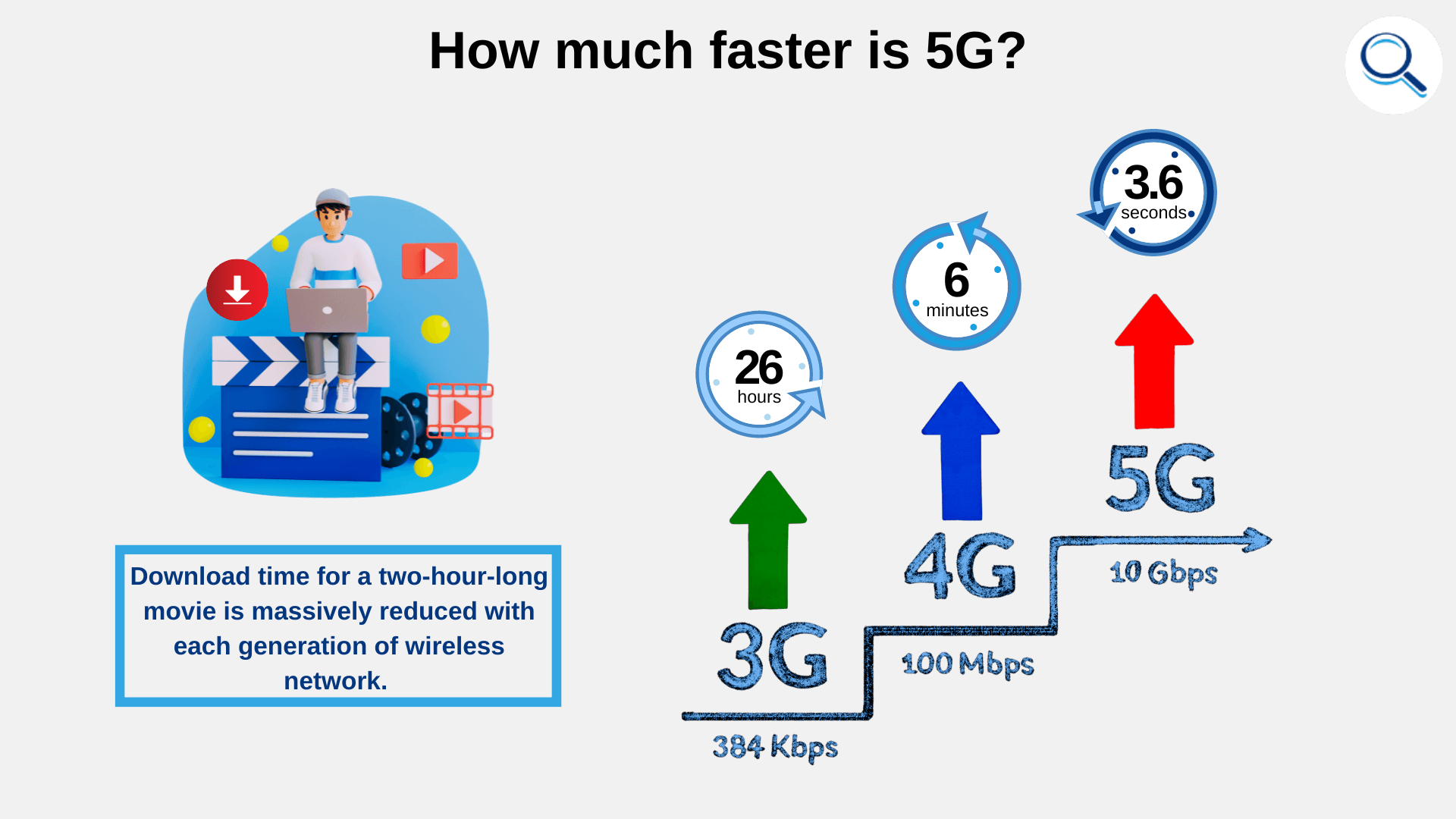 One thing we haven’t touched on. As the superfast 5G rollout continues, the quality of fixed wireless internet might improve. The bottom line is that it’s impossible to be sure you have made the right decision. The best thing to do is not to lock yourself into a long-term contract. Make sure it is either a month-by-month arrangement or you have a trial period during which you can change your mind and get your money back.

Good luck out there!

Why does a fixed wireless signal have less latency than a traditional satellite signal?

No matter what type of internet connection you have, data has to travel from a distant source to you, then make the return trip. This is called latency. Traditional satellites have high latency due to the fact that data has to travel from your house all the way up into space and back again. With a fixed wireless internet service, the trip is shorter, resulting in lower latency.

What are typical download and upload speeds for fixed wireless internet?

It depends. It can be considerably faster than traditional internet service. Some providers claim you can average upwards of 100 Mbps downloads and at least 10 Mbps uploads. That’s probably a best case scenario. As you can see from our graphic above, the median tested speed clocks in much slower.

Why is weather more of a problem with traditional satellite internet?

Since traditional satellite service’s infrastructure is hundreds of miles overhead and the signal covers a larger swath of land, even bad weather in the next state can have negative impact on a signal passing through the entire atmosphere. With fixed wireless, the only weather that will impact your service is any that is between you and the base station, which is likely no more than 10 miles away.

Why are fixed wireless antennas (dishes) so much smaller than with traditional satellite internet?

This has to do with distance as well. As a signal travels over greater distance, it becomes dispersed. With the signal for a fixed wireless system typically traveling no more than 10 miles, the antenna at your house can be smaller because the signal has not had time to disperse. It’s tight still.

5G, the widely heralded update to wireless technology, has been in a slow motion rollout since 2010. Estimates say it might be towards the middle or latter part of the decade before it is available to the majority of the United States.