A Guide to Understanding Broadband and Fiber Internet

For the average internet user not buried in the minutia of terminology and performance, it might not matter much whether you have a broadband or fiber optic connection. What’s the difference? While you can keep reading for a guide to understanding fiber internet, here’s the short answer.

Before Broadband: The Bad Old Days of Dial-Up Connections

It may be hard for today’s internet users to conceive how comparatively slow it was to do even basic online browsing when using a dial-up connection. It also generated a hideous bleep, screech, and ding symphony as the remote computers negotiated with one another over telephone lines. 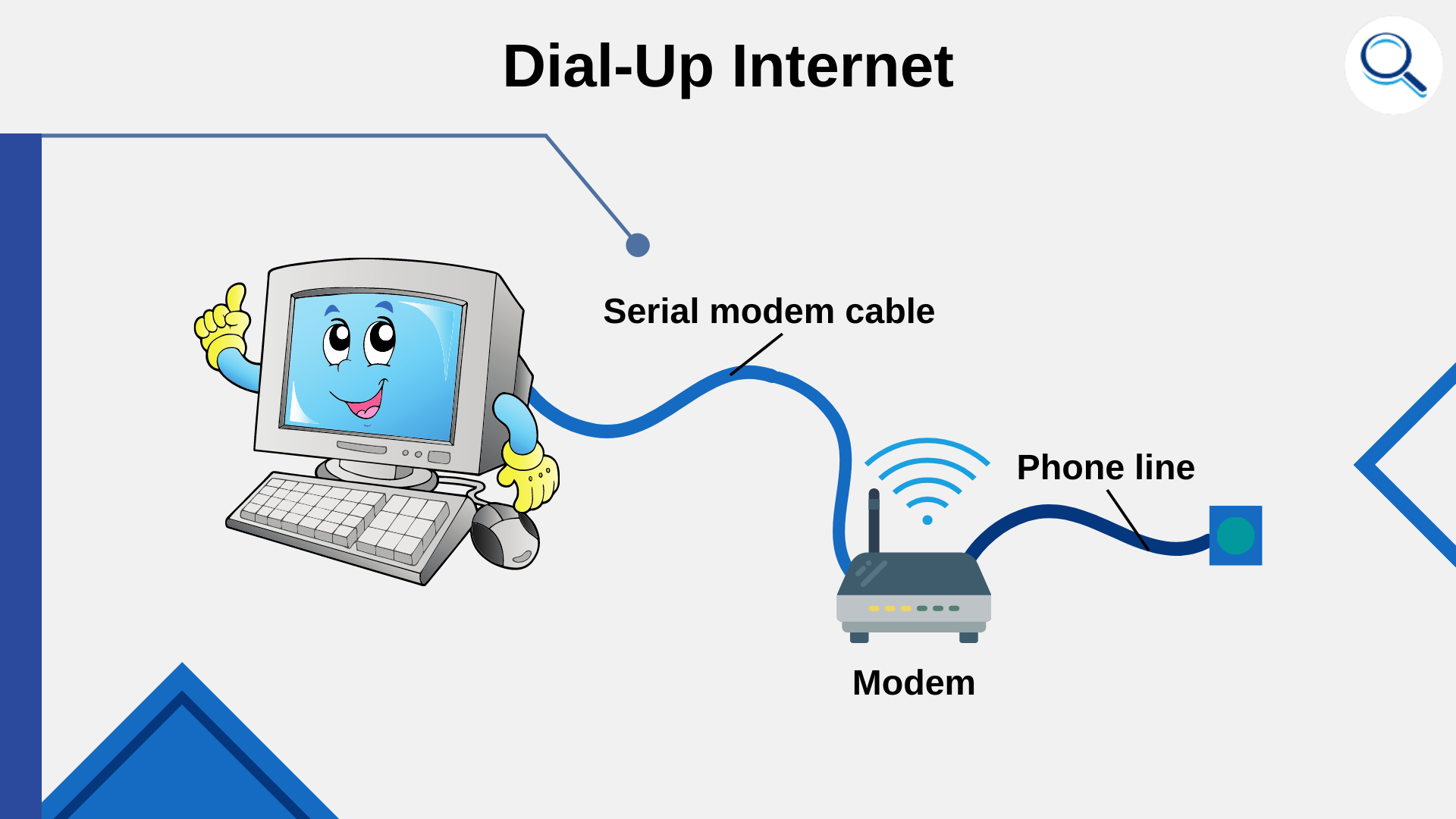 Though a 50 Kbps dial-up speed was available to academic researchers and the military as far back as 1984, most people couldn’t access the internet until the private sector took over in 1993 and brought us the World Wide Web.

Though much of the world was stuck at even slower dial-up speeds like 14.4 Kbps and 28.8 Kbps, the maximum dial-up connection speed was 56 Kbps. How fast is that? Not very. In fact, it was unimaginably slow by modern standards.

Here are some examples:

• It took from 28 hours up to 3 days to download a low-definition movie.

The Birth of Broadband

Luckily, computer scientists figured out how to go faster and called it broadband.

DSL was the First Broadband Technology

The initial iteration of broadband internet was called DSL (Digital Subscriber Line). Though it still ran through ISPs and telephone lines, a DSL connection could take a user up to 35 Mbps. This would seem slow to many modern internet users, but it blew dial-up connections out of the water. 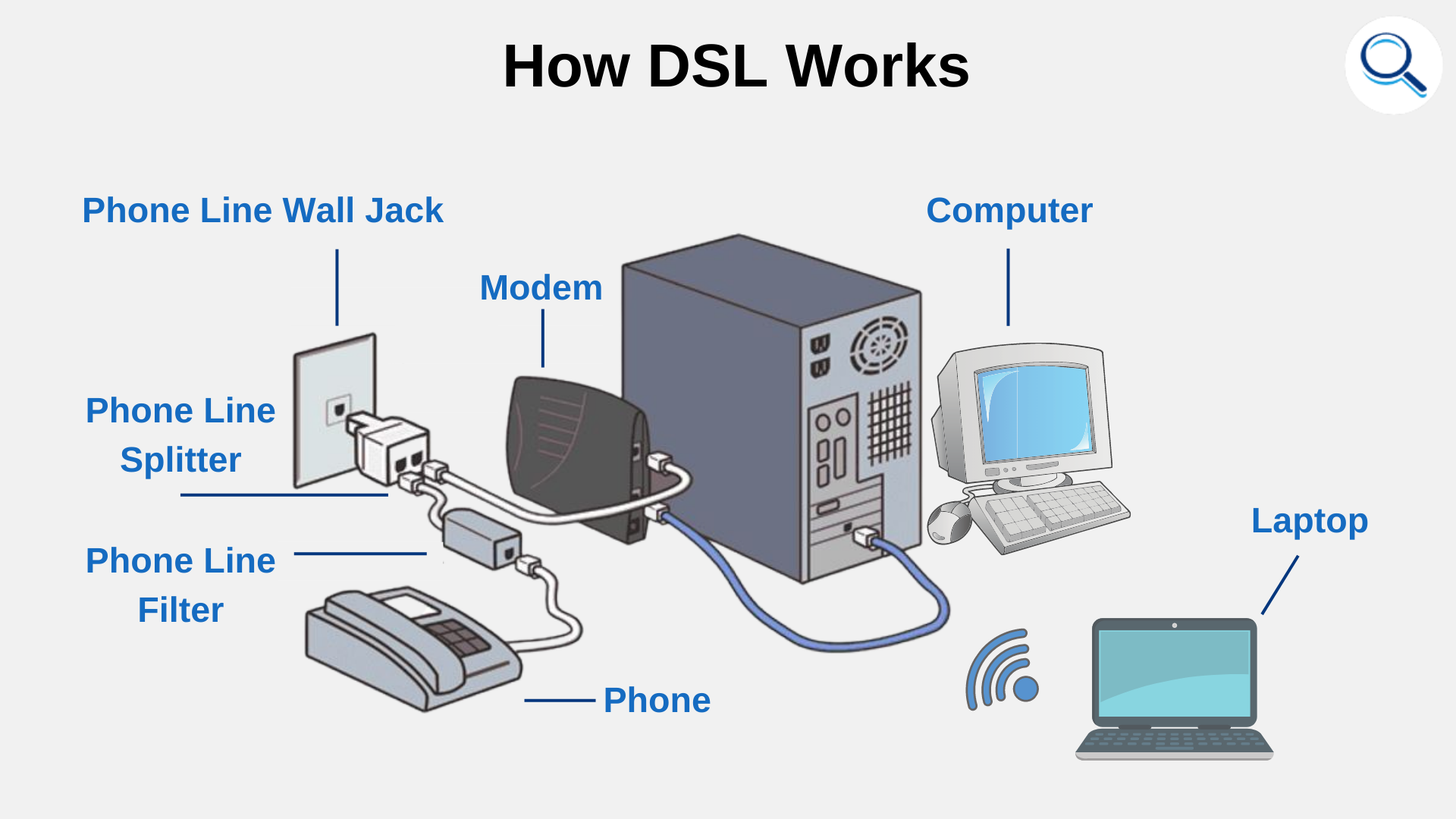 Iterations of Broadband and Wireless

• Cable Internet Service - starts at around 25 Mbps and can get as fast as 1,000 Mbps but degrades over distance.

• Satellite internet (new) - SpaceX and Amazon are rushing to fill low earth orbits with thousands of internet satellites. Expect faster speeds and better coverage as this new technology is rolled out.

• 3G, 4G, 5G - This mobile wireless technology for smartphones and tablets is getting faster all the time. While the recently retired 3G delivered about 1.5 Mbps, the current 5G rollout offers an average of 50 Mbps. 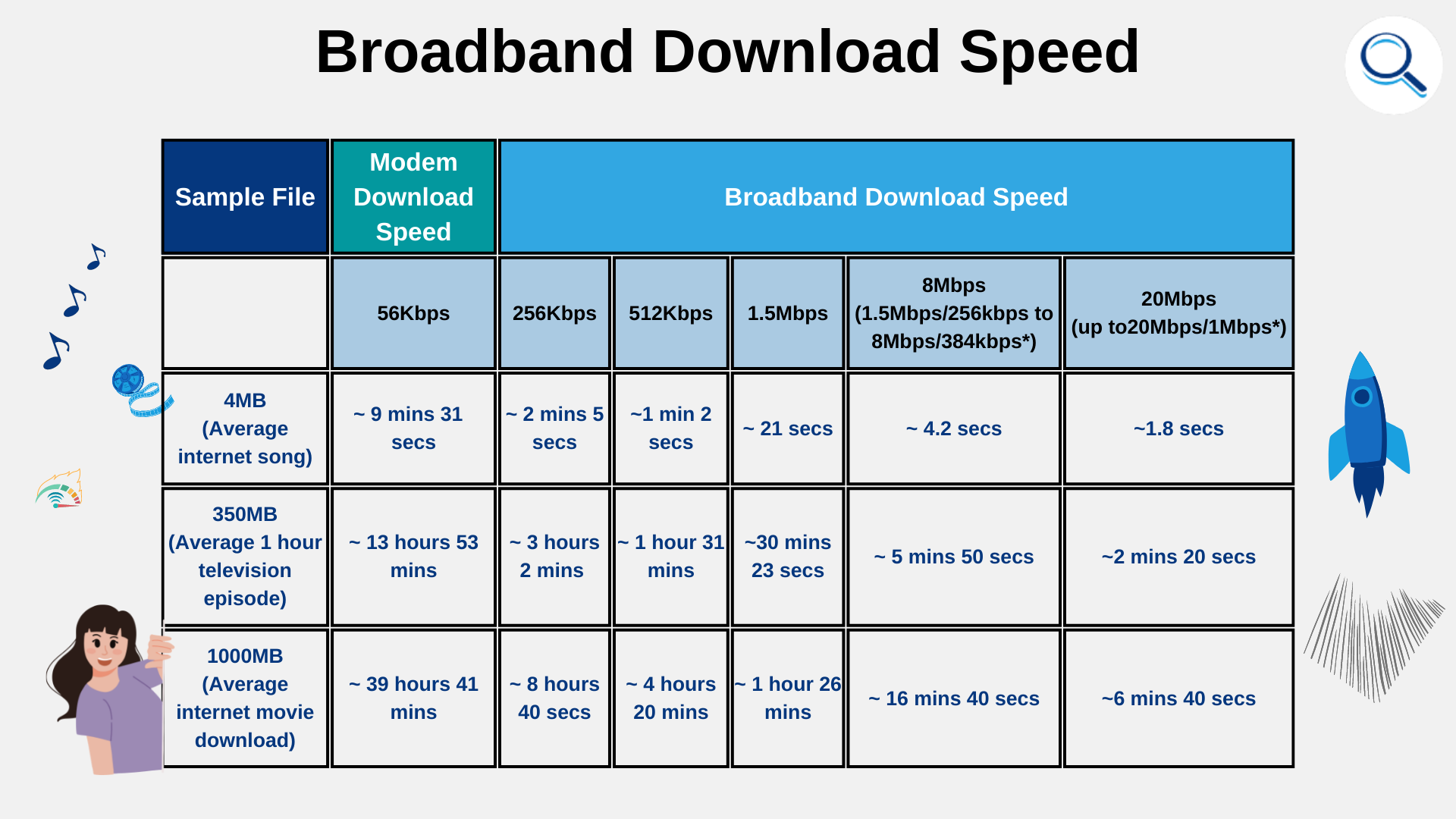 That about sums up everything that came before fiber internet technology. On to the main course.

What is Fiber Internet

Fiber-optic internet, or simply “fiber,” is a broadband connection that can reach speeds of up to 940 Megabits per second (Mbps) with a low lag time. The technology uses a fiber-optic cable, which sends data much faster than other broadband options. In addition, fiber-optic cables are not as affected by severe weather conditions as other traditional cables, which helps to cut down on outages. It also resists electrical interference effectively.

Why are Fiber Internet Connections so Fast?

The short answer to this question is that information travels faster down a fiber optic cable than the copper construction of other types of broadband. A LOT faster. While fiber optic technology uses light pulses to send data along the strands of glass or plastic inside the cable, previous generations of broadband use electrical currents traveling along copper wires. 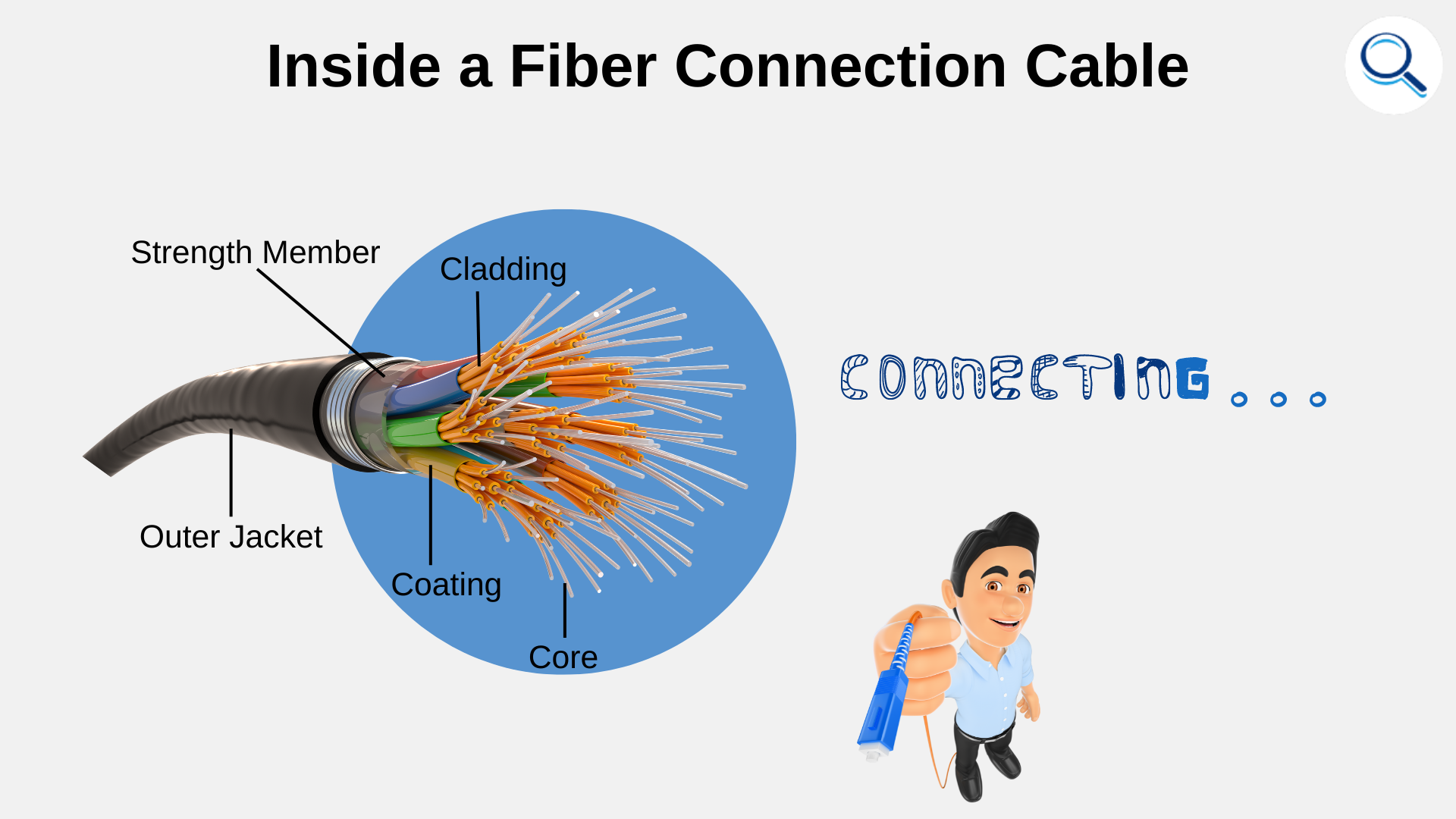 In both cases, data is encoded, transmitted, and reassembled based on changes in energy.

The “speed” of a fiber optic or copper cable is determined by how much data passes a given point over a specified time. The bottom line is that fiber optic design can pass a greater amount of data over that point.

Doesn’t degrade over distance: Electrical interference causes data sent through copper lines to deteriorate over distance. Fiber optic networks are not susceptible to this kind of electromagnetic interference, so that they can connect people over much greater distances.

It’s faster: It’s easy to say fiber optic networks are faster, but how much faster? The average broadband connection (not counting fiber optic technology) runs at around 50 Mbps. Compare that to a fiber optic network that operates at nearly the speed of light and can hit 100 Gbps. Note that it is gigabits rather than megabits.

More wires: DSL and other broadband options have two or four wires inside the line. A fiber optic line is packed with dozens or even hundreds of the glass or plastic strands that make up a single wire. Data can be carried along each of these strands.

Faster, more reliable connections: As a result of the features just discussed, a fiber optic connection offers faster upload and download speed which results in better quality VoIP phone connections, videoconferencing, HDTV, and more. Everything you can do with broadband can be done more reliably with fiber optics broadband.

Is Anything Faster Than Fiber?

Fiber is the fastest internet connection on the broad consumer market right now, but who knows how long that will last? We’re already seeing scientists tinker around with laser technology that will reach 1 Gbps + without wires. And it’s invisible.

Laser internet offers zero latency thanks to its ability to hit the speed of light. In addition, it works well in odd environments like ship-to-shore connections and is impossible to intercept. Hackers hate that idea, but the rest of us love it.

Not anywhere near as broadly available as fiber internet, you should keep your eyes open for it to hit the consumer market hard in the near future.

One consistent feature of the internet is that it keeps getting bigger. By that, we mean individual pages and sites offer more content than ever before. This content takes the form of audio, video, and interactive files that occupy an increasing amount of bandwidth.

And don’t forget about streaming. This method of content consumption has become the bandwidth hog of all time. In fact, it is the number one user of bandwidth for all internet service providers.

With streaming, our consumption patterns have changed. We no longer download audio or video files to watch or listen to once they have been completely transferred to the device we are watching them on. Instead, such content is consumed “on the fly.” Being able to stream quickly and easily has become the expectation, but achieving it requires a fast internet connection and plenty of bandwidth.

For decades, significant sections of rural America have suffered from a lack of high-speed internet access. Hard as it might be to believe, there are still households limping along with dial-up access. This leaves at least some percentage of citizens unable to do all the things online the rest of us are doing - watching movies or streaming television, taking jobs that require attendance to videoconferences, or even communicating with family and friends overseas.

The Fiber Broadband Association (FBA) referred to the problem as the North American Rural Digital Divide. This refers to the fact that, compared to urban areas, rural internet access lags far behind at an average speed of 4 Mbps.

In fact, FBA research shows that a family of four in the United States needs a speed of 131 Mbps to work, play, and surf like their city-dwelling counterparts. A full 62% of rural North Americans are scraping by with the lowest performing “broadband” service.

What’s the solution to such a large problem? In a few words - fiber internet access. 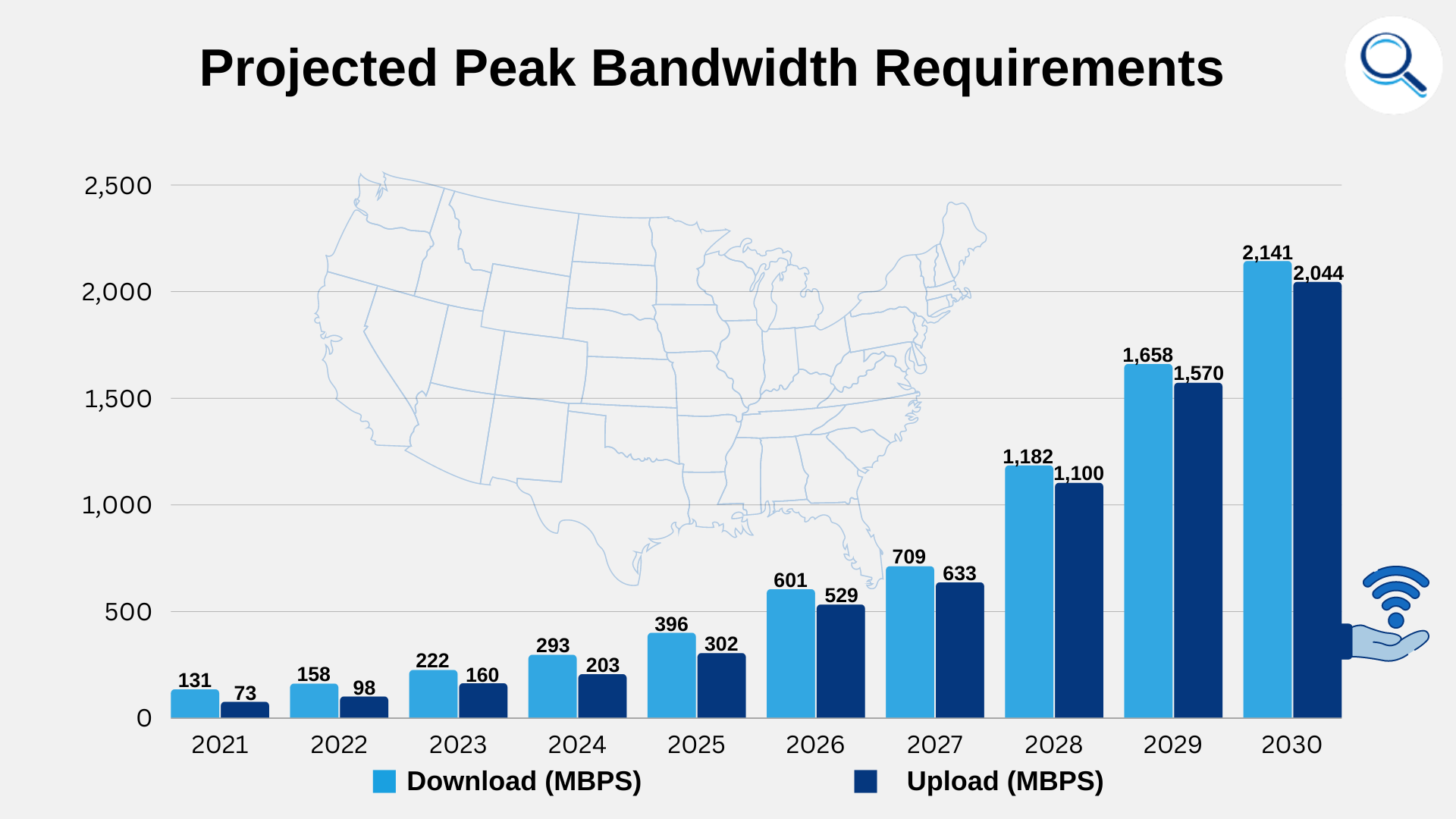 Why Fiber Internet is Part of the Solution

It would be nice to claim that fiber internet is the magic wand waiting to be waved over rural areas and - voila - highspeed broadband for users everywhere. The truth is that bringing broadband to this uncovered area is a massive project that will likely be solved by a patchwork of technologies that includes fiber and 5G wireless and low-altitude satellites.

The problem is the cost and the will to write such a massive check. The Biden administration’s American Jobs Plan details how to provide fiber-only internet to rural America. The problem is that a point of diminishing returns is eventually reached as you build out networks to the most isolated people.

While there are estimates it would cost $80 billion to hook up the last 14% to fiber internet, fully half ($40) would be spent to reach the final 2%. We’re talking about isolated Alaskan towns and deep woods communities in the Appalachian Mountains. As we’ve learned from our recent past with the Obama administration’s Open Internet Order (OIO), government programs to solve problems tend to have the opposite effect that was intended. The OIO, widely known as net neutrality, caused an 18% reduction in internet speed.

How will all of this ultimately play out? Check back in ten years and ask us again. One thing is relatively certain.

Fiber internet will be part of the mix.

Hopefully, the preceding discussion has shed light on what fiber internet is, how it works, and what it is capable of. Experts are looking to it as a “future-proof” connection technology which means that we’ll still be using it no matter what the future brings.

To claim anything is future-proof is a bold statement, but from our vantage point near the end of the first quarter of the 21st century, it’s as good of a bet as any and better than all the other broadband solutions that have come before.

What is dial-up internet?

Before broadband, dial-up was how you accessed an internet connection. Far slower than even the slowest of today’s broadband experiences, dial-up crept along at 56 kbps and would be almost impossible to use with today’s high bandwidth internet.

What upload and download speeds can fiber internet deliver?

While other broadband connections have a much faster upload than download speed, fiber internet is able to achieve a 1 Gbps speed both ways.

What is a 5G connection?

This is the latest generation of wireless technology. It is much faster than 4G and might even play a part in delivering faster internet to rural areas.

What is low-altitude satellite?

Companies like SpaceX and Amazon have projects underway that include delivering highspeed internet to remote areas by linking thousands of low-altitude satellites in space.

What is the difference between broadband and fiber?

Fiber is a specific type of broadband that uses fiber optic cable to deliver an ultra fast internet experience.