One of the realities of our modern age is that we have all been forced to develop a rather high level of digital literacy. In other words, we need to be good at using technology, which means we need to understand it.

For some, this is scary; these devices, which have become so intertwined in our lives, are quite complex, but the goal shouldn't be to be an expert. Instead, the idea is to acquire a working knowledge of these technologies so that you can be a smart consumer and also perform basic troubleshooting that will save you contacting customer support.

Of all the different things in today's world we should know about, the internet is one of the most relevant. It has become so integral in everything we do, shouldn't we know how it works and what are the different factors that determine its efficacy?

Fully grasping how the internet works would take longer than we have time for, but again, the point is not to master the concept but rather understand it. When it comes to the web, perhaps the two most important things you need to understand are bandwidth and speed.

Often confused as being the same thing, these are two different, albeit related concepts. Both have an impact on the quality of your internet connection.

Below, we'll explain in detail what each one is and how it's measured, and we'll also discuss how to find an internet plan that meets your needs and improve an under-performing network.

The first thing we should point out is that bandwidth, as understood by internet people, is not the same type of bandwidth used in other areas of science. We won't go into the other definition of bandwidth, as it will only make things more confusing, but just know that if you're studying internet bandwidth, you're only studying one part of the concept.

As it relates to your internet connection, bandwidth is the total speed available on your network at one time. It's the total amount of data, measured in bits that can travel across the network at any given moment, usually measured in seconds.

Consider a system of roads entering a city to help you conceptualize this and understand how it can affect your internet experience. 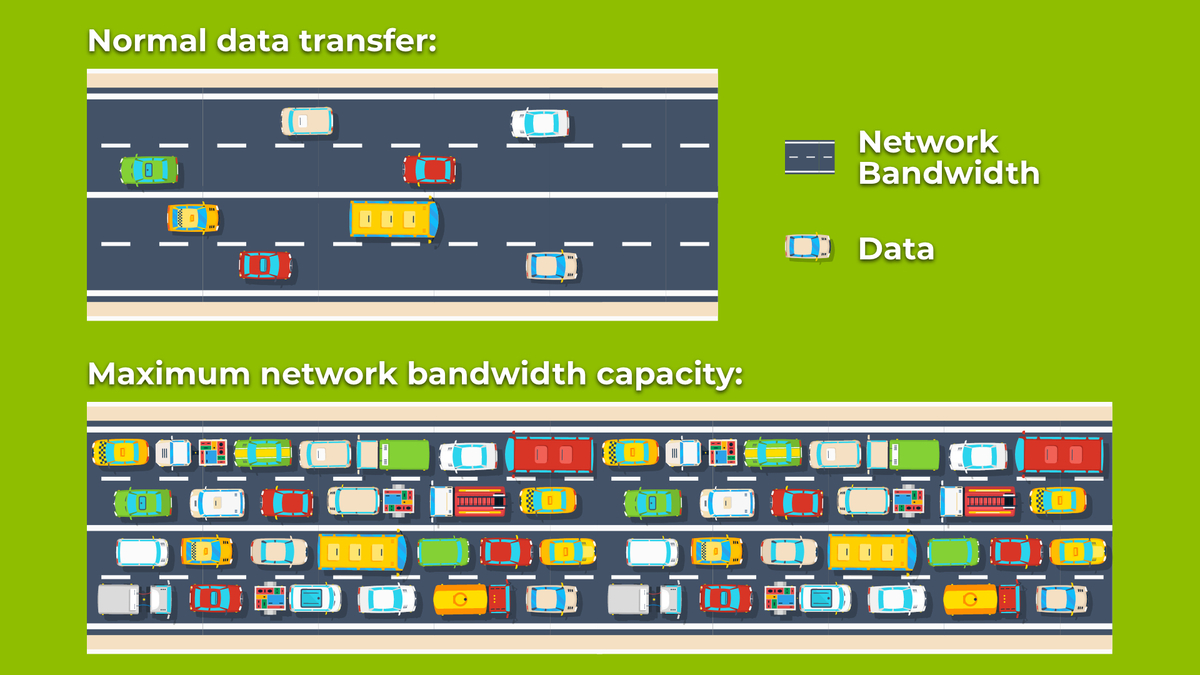 No matter how many roads there are, there is always a maximum number of cars that can be traveling on them at a given moment. If more cars are trying to get in while capacity is at its highest, then there will be a backup, delaying how quickly cars can enter the city.

Notice how it wasn't until the bandwidth was exceeded that speed was affected. Otherwise, bandwidth does not affect speed. So, while it's certainly important and something to consider, it is not the most significant determinant of network performance.

Since bandwidth refers to the total speed capacity of your network, it's really indicating how much data can be transferred over the network at one time. For that reason, it's measured the same way in which we measure internet speed, in kilobits per second, (Kbps), megabits per second (Mbps), gigabits per second (Gbps), and terabits per second (Tbps), although this last one is very rare.

Typically, when referring to bandwidth, the number of bits per second is referred to as the bitrate.

Because the labels used to describe bandwidth are the same as those used for speed, ISPs often don't advertise network bandwidth this way but instead calculate for you, based on their vast supply of usage data. However, they do use Mbps to refer to speed, which can create a lot of confusion. We're going to go more into these definitions in just a moment when we discuss how speed is measured.

As mentioned, bandwidth and speed, although measured in the same way, are not the same. Bandwidth, unless exceeded, has no impact on speed. So, then, what exactly do we mean when we talk about the speed of your internet connection? Well, this is the speed with which data transfers over your network.

Using the previous example of cars entering the city, connection speed would refer to the velocity that each car (data) is moving. So long as the bandwidth is not exceeded, these cars (data) are free to travel as fast as they would like, and as the laws of physics allow (there are no speed limits in our fictional city).

For most users, download speed is much more important, as it's the one that will most affect your experience. As a result, ISPs often only advertise download speed. Still, those who will be engaging in file transfers and web development, among other activities, may want to push for these numbers to ensure their network meets their needs.

It's essential to understand the information presented to you when looking at and comparing different internet plans.

Internet speed, like bandwidth, is measured in bits-per-second (bps)—the bigger the number, the faster the connection. But unlike bandwidth, which refers to the total capacity of a network at a time, speed refers to the actual amount of data being transferred over your network during a given period of time (a second).

The most common labels used to express internet speed are: 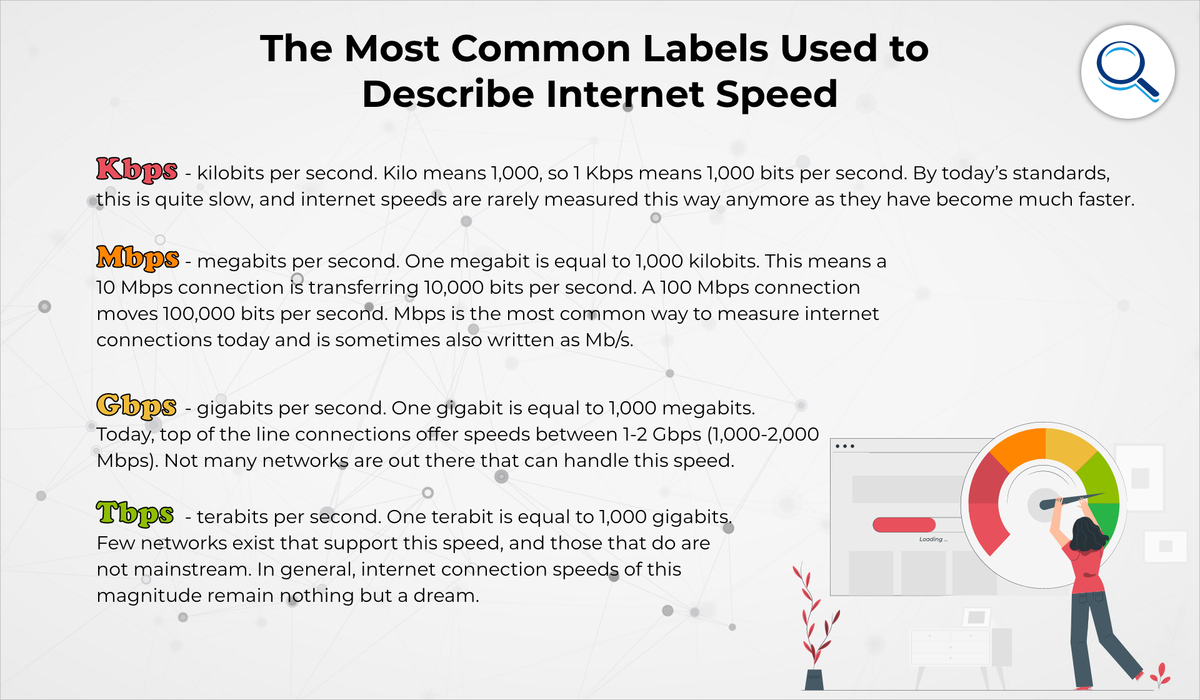 One piece of jargon that gets most people confused is the difference between bits and bytes. To be clear, they represent the same thing – data – but they do not mean the same thing.

In simplest terms, a byte is eight bits. Bytes measure hard drive storage space, file sizes, data limits, etc. To distinguish between the two, bytes are denoted with an uppercase "B," as in KB, MB, GB, and TB, whereas bits are written with a lowercase "b," as in Kbps, Mbps, Gbps, and Mbps.

In general, keep these concepts separate. When looking at internet connections, there's no real need to be thinking about bytes, unless you are a bit of a math nerd and want to calculate how quickly your connection will operate in real-time.

Let's say you are scrolling through your Google Photos account, and you decide you want to download an album onto your computer so that you can do some editing and save them to a backup drive. Before downloading, Google tells you that the album is 2.3 GB in size.

To figure out how quickly you will be able to download this, you need first to convert this number into megabits, as this is what your internet connection is measured in.

We remember that one gigabit was 1,000 megabits, so all we need to do is multiply 2.3 times 1,000, right? Actually, no. This is because one gigabyte actually equals 1,024 megabits (the binary nature of computers means we're almost always working in base 2, something you don't need to remember if you don't want to, so long as you accept 1 GB is equal to 1,024 megabits, and 1 MB is equal to 1,024 kilobits, and so on).

The quotient of this simple division problem, which is 28.03 seconds, is the amount of time it will take my internet connection to download this photo album.

Of course, it's difficult to know how fast the actual connection you receive will be, but doing this calculation based on your internet needs will allow you to determine how much speed you need from your connection.

How Much Bandwidth and Speed Do You Need?

Now that you have a better idea of what internet speed and bandwidth are, how they're measured, and how they impact your internet experience, it's time to take a look at how to figure out what type of connection you need at your home.

Knowing the many different things that determine the speed of your internet connection, it might be a good idea to investigate your own network to see if there is anything you can do to improve its performance. 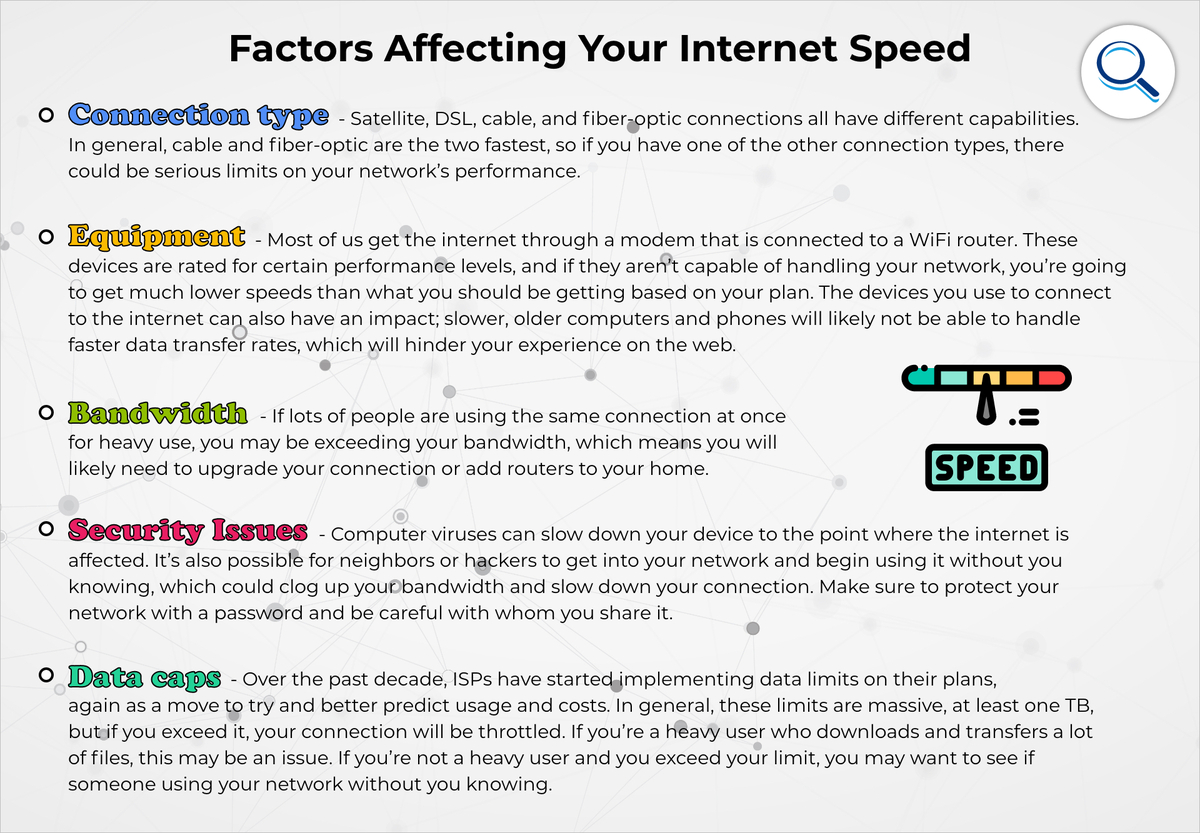 To study your own network, the first thing to do is frequently check your internet speed. You can do so by using a free internet speed test. As a bonus, thanks to your decision to read this article, you'll know what the numbers this test produces mean! Hooray!

This is useful for more than just feeling good about yourself; it will help you determine if you need to upgrade your internet connection and test out if the things you're doing to improve connection speeds are working.

However, it's also a great way to keep your ISP honest. These companies are notorious for advertising speeds that are way higher than what's delivered to your home. While sometimes this occurs because of things outside of their control, many people suspect throttling so that ISPs can better predict network usage and manage their cost structures.

If you find you're consistently connecting at a slower speed than advertised as part of the plan for which you signed up, it might be worth investigating other providers to see if there is a better deal out there, or at least one that provides you with more bang for your buck.

In the event you test your connection and use your new-found understanding of internet speed to determine that your network's performance is not what you want it to be, there are a few things you can do to help that will save you from having to spend the money and endure the hassle of switching providers.

As you can see, the concepts and jargon related to internet bandwidth and speed, although confusing due to overlapping names, are not all that difficult to understand, but having this knowledge is just the beginning. Its purpose is to empower you when you're operating in this digital world by helping you better identify your needs and find the deals that will best meet them. So, go forth with what you know and secure yourself the best internet connection you possibly can.