YouTube Stats, Facts, and Trends You Need to Know for 2022

YouTube dominates the internet video scene like practically nothing else online. No other platform can compete with its library of uploaded content, its infrastructure, and according to many, its user interface. We’ll go into why it is so popular and the extent of its popularity in a bit, but suffice it to say it is a household name like few other websites or apps. And that means a lot in today’s world, whether you are a marketer, content creator, or average user looking for funny video clips.

There is much to understand about YouTube and many statistics to study behind the scenes. What’s most important, and what are the trends that matter? While we can’t go over everything, here are the basics about YouTube you need to know for 2022:

For starters, what are the basics we know about YouTube? What does the platform currently look like? 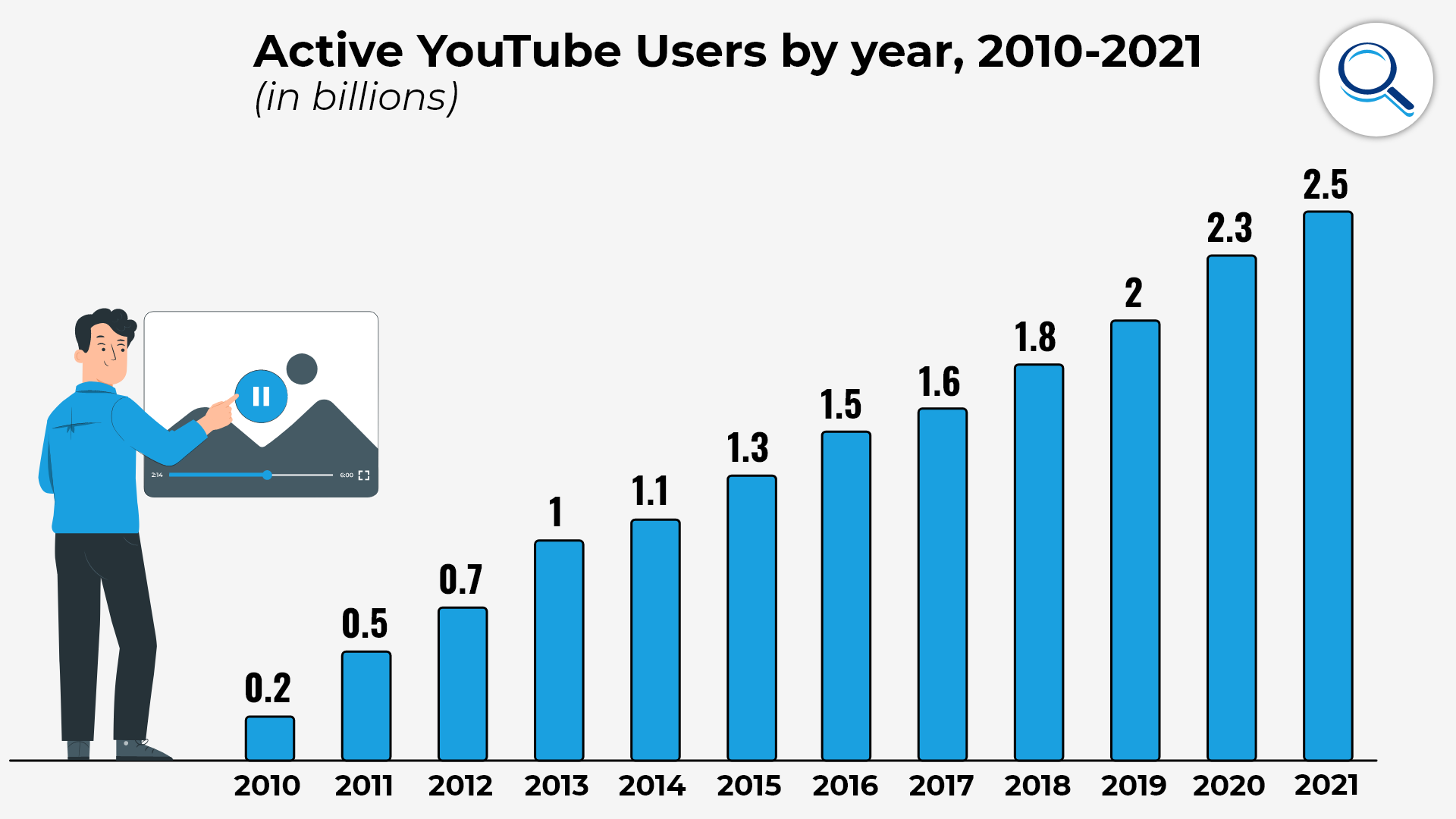 Demographics and the Userbase

Who watches YouTube, and how much do they watch? Are there trends among specific demographics that should be noted? And how important are they if there are such trends? 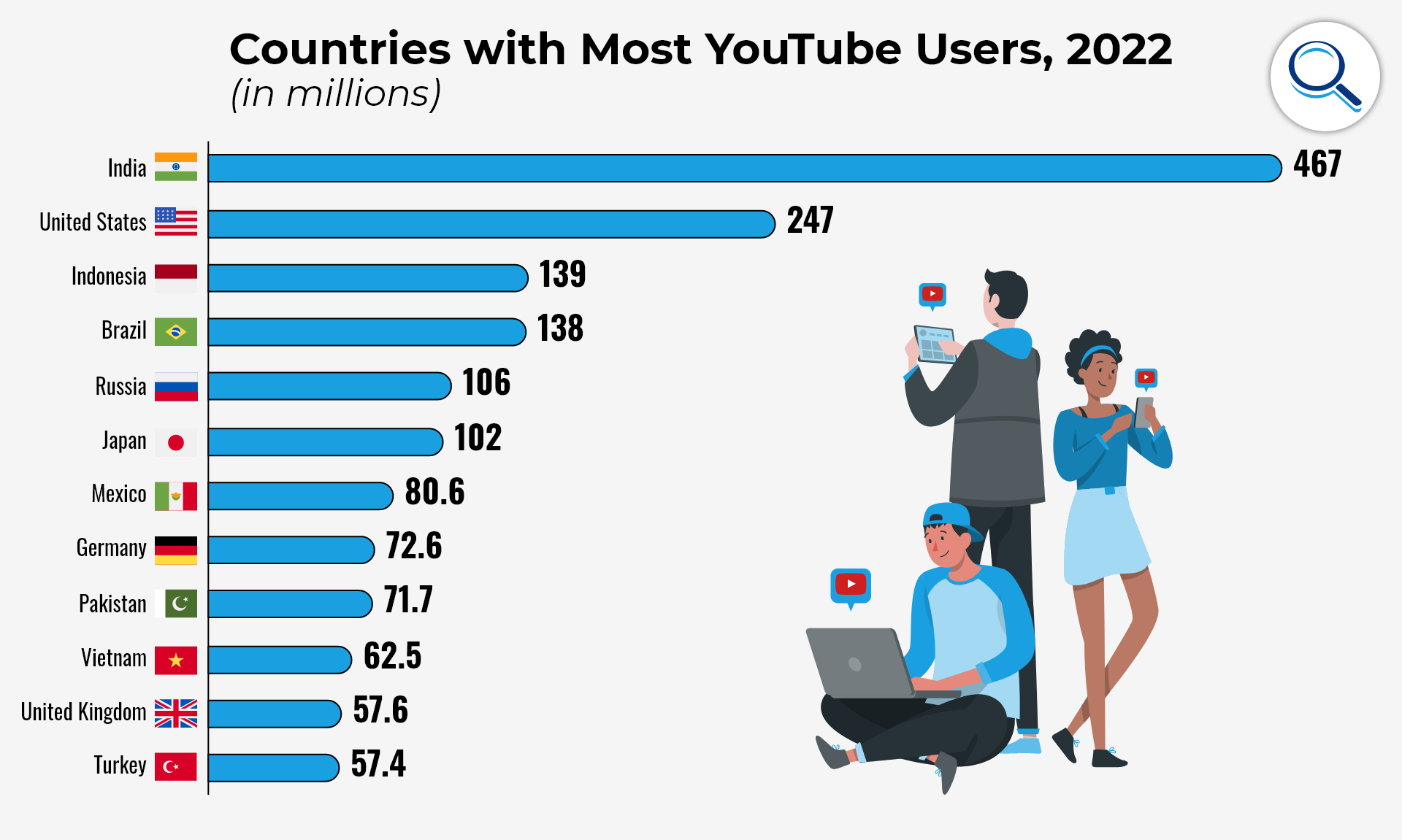 What channels are the most popular online? What videos get watched the most? Is there any trend in what makes a video go viral? Marketers and content creators have been studying the answers to these questions for years, and there are some answers. We cannot predict viral videos yet, but in hindsight, we know who and what works best.

So what are the top channels or content creators as of 2022? 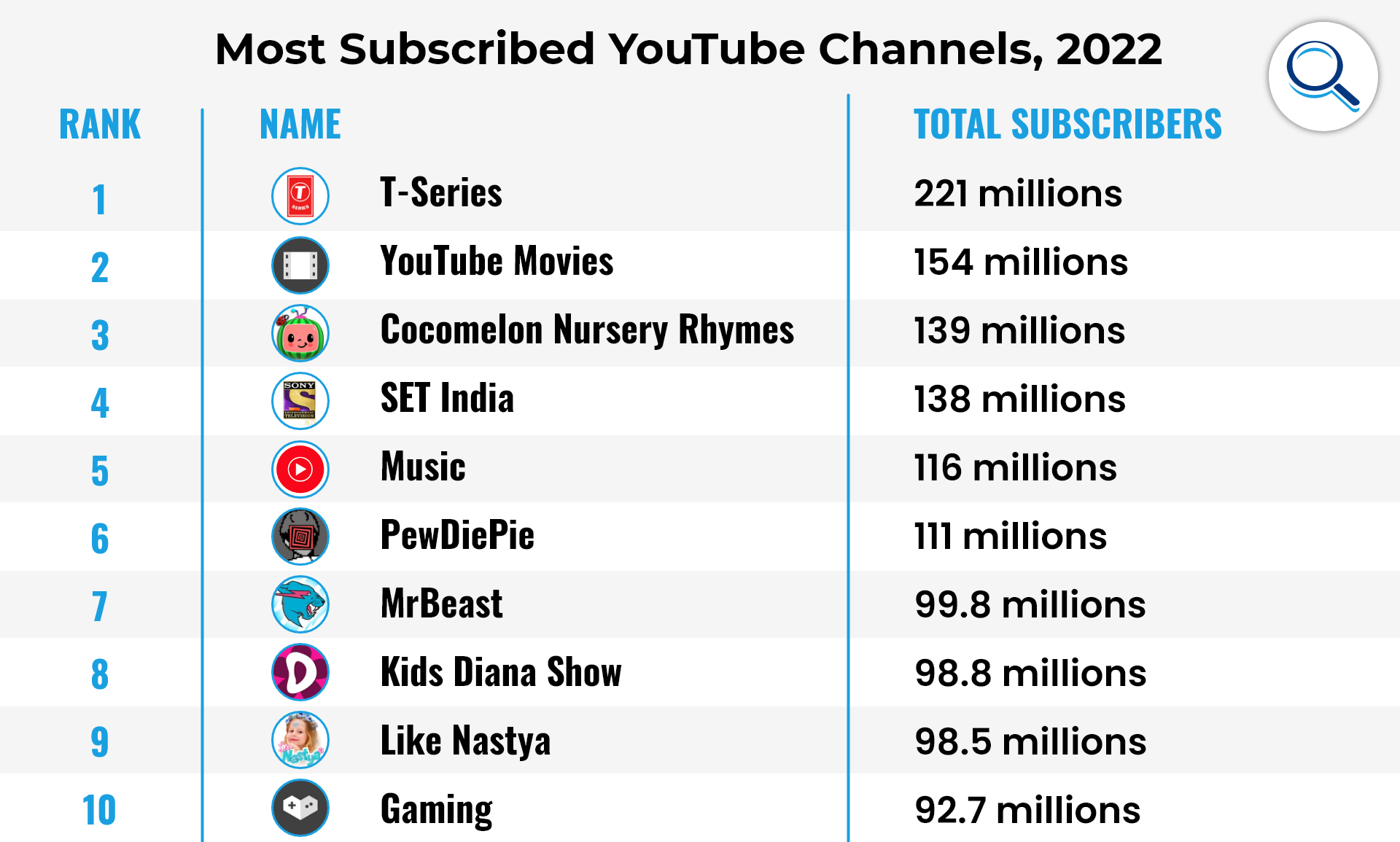 A few of these might be names you have heard before, while others are entirely foreign. Why? Probably because they are literally foreign to you and not in your language. Alternatively, the channels might be for kids, and you don’t have children around the age that would watch the channel. And a couple of these, such as “Music” and “Gaming,” are more general categories that people subscribe to.

On top of channels, some forms of content or topics are more popular than others on YouTube. It might be because of an established base; YouTube is the best format compared to other video sites or another reason entirely. There are plenty of guides and other articles that go into this more, but gaming content (sometimes daily content on gaming) does well, as do tutorials and certain types of reviews.

You’ll also see plenty of music channels and the like. The trailers for big movies are all available on YouTube. Huge corporations and entertainment entities use it to spread the word about their latest thing. And given the pull of some properties, those videos do pretty well for themselves.

A Changing Model for Creators

Between a changing algorithm and monetization issues for creators, content creators relying on YouTube for their income have to think outside of the box. Some might be using Patreon, while others are using alternatives and creating additional sources of income for themselves, such as merch. Such things have been around since YouTube became a possible career for people. Still, now it’s more necessary for these creators, given that there is an increasing uproar among them about dealing with the ad program and demonetization. It is done via a bot which is not necessarily the most accurate thing in the world. So instead of YouTube ads, a creator might use a more reliable deal for an in-video advertisement.

There is much more to say on the subject, which deserves more than this article can give. Yet we recommend that you look into it more and note that the trends regarding income for creators are changing, and things might come to a head eventually.

Most noticeably, now it results in a trend where YouTubers are not necessarily trying to create videos with the most views as often as possible to create ad revenue but instead making videos catered towards an existing group of fans and their interests. It’s not about the broad audience but about giving the people who actually support and pay for the channel what they want.

While ads are the bread and butter of YouTube’s income, there is also a premium subscription called YouTube Premium. It used to be called YouTube Red, but that didn’t reach the levels of success YouTube hoped for. It provides an ad-free experience and a few extra perks such as YouTube Original content (not terribly popular), YouTube Music Premium access, the ability to download videos to watch offline, and background play on your phone.

YouTube Premium has been growing in popularity, perhaps as a response to the increased ads on the platform and the ineffectiveness of certain ad blockers. And while YouTube Originals and YouTube Music Premium aren’t popular, other perks are helpful to YouTube power users. You can look at the growth of premium subscriptions below. 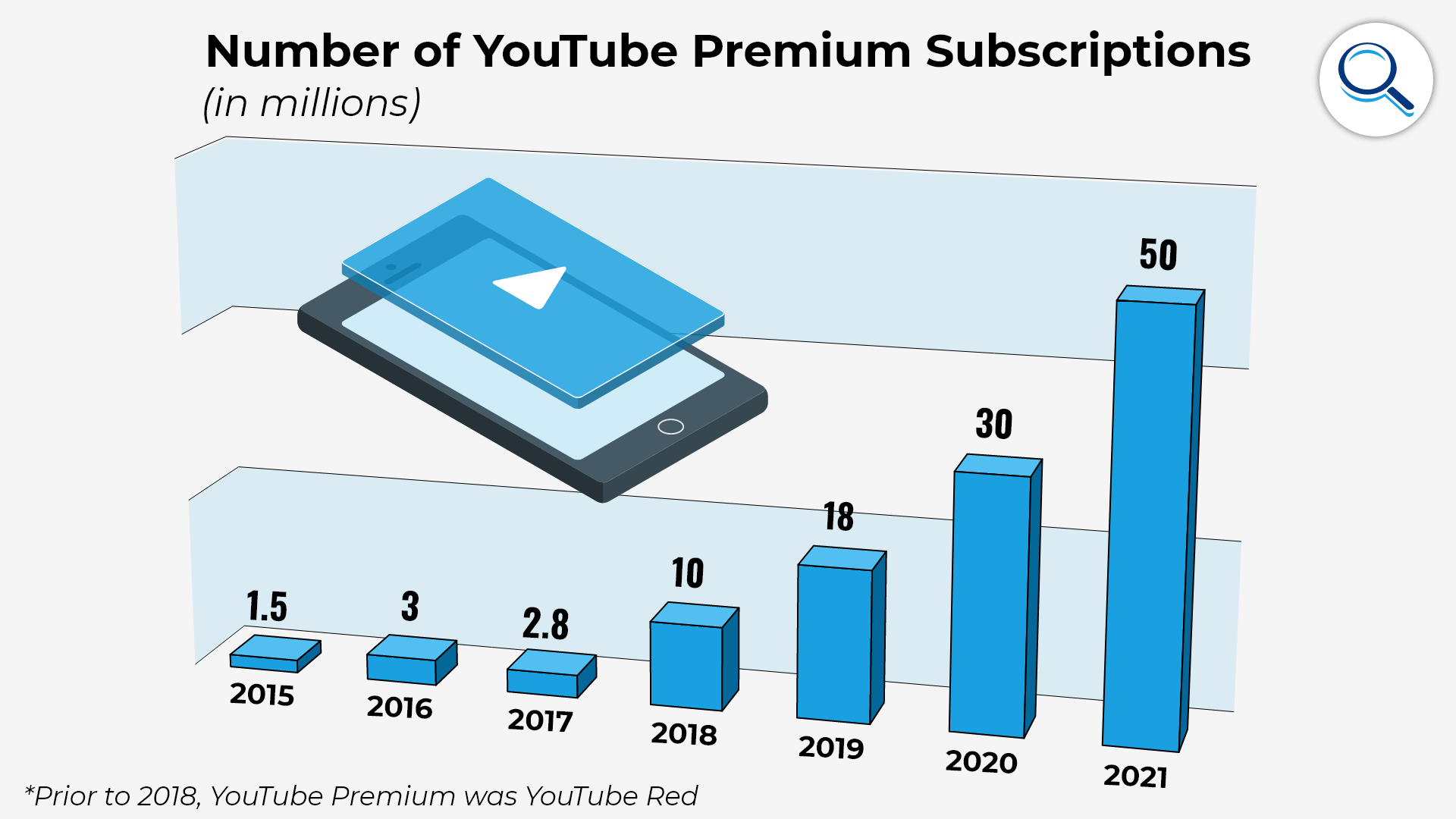 Note that YouTube Red was included here before the switch to Premium in 2018, but they are the same. What’s otherwise interesting is that while there are certainly a lot of Premium subscriptions here (more than the population of most countries), it’s still a small percentage compared to the number of total users. However, we expect YouTube to continue to pursue Premium as a revenue source for years to come, perhaps tweaking or adding benefits in the process.

YouTube doesn’t exist as a charity. While YouTube videos are generally free to watch, YouTube still needs to support itself, and content creators on YouTube need to support themselves, given how many of them create as their full-time careers. YouTube is generally supported by ads and will be for some time. That means we need to understand advertising on the platform as well as

Here’s what you need to know to start with: 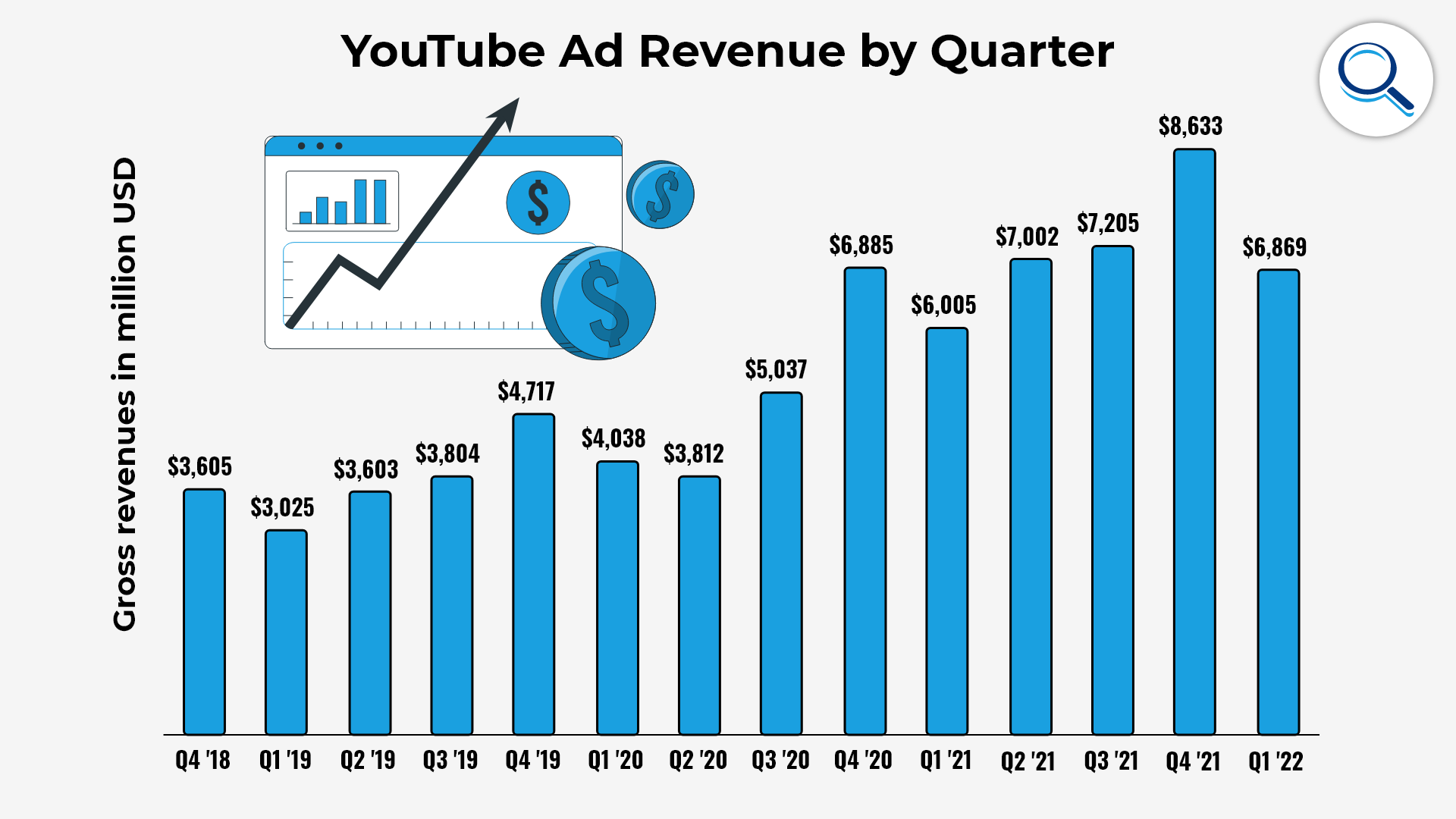 YouTube, like everything else, will change over time and might be barely recognizable in a decade. While we’re confident that YouTube will continue for years to come (look at the numbers and userbase), what we aren’t sure about are the features to come, what precisely the userbase might use it for, and how it will grow. Nonetheless, we do have a few predictions we are confident about, listed below:

YouTube continues strong, and people are using it every day. Statistically, you’re likely to watch it for at least a few minutes today if you haven’t already. Yet it is so expansive that if someone were to try and understand it entirely without help and view most of what there is to see, it would take multiple lifetimes. We hope that this article has provided you with some helpful information and understanding, and we invite you to return to this page as you feel the need.