The Rise of Social Media Users- Statistics for 2022

The rise of social media might be one of the most important changes to occur to the average person over the last two decades. The only possible competitors are the growth of the personal computer (and the internet around them) and the rise of the smartphone. New technology has always shaped society and the people around them, but, rarely, has such a vast transformation happened so quickly.

Yet while we can and will talk about the growth of social media over the last few years and where we stand today, we want to focus on the users. Social media is the users, after all. Different networks have different focuses, demographics, use cases, and more. It seems there is a network for everyone, and there is a lot to consider. Think about the diversity you find just within your own social media feeds. If you move outside of that there are more things than you could possibly imagine.

While we cannot talk about every single statistic available (there would be books to write), here are the most important things you need to know:

What Do We Consider Social Media?

Before anything else, we have to define social media. Everyone has their own idea, but we need to centralize what we’re talking about if we are going to talk about trends here. The stats will likely have their own ideas but only so much can be done about that without stifling the discussion.

Social media is effectively any tool, app, site, or program that allows its users to share ideas and content with the public. On social media, the users are the content, as opposed to a site with a simple comment section that probably won’t even be noticed, much less read. On it, the rules for sharing might change (Twitter’s character limit or some of the more ephemeral posting types), but users are the driving force.

It's a broad definition in some regards, but a clear one. It does make us wonder about fringe cases such as YouTube. Most people would not think of YouTube as a form of social media, but in many ways, it fits all of the proper metrics. It’s primarily driven by user-created content, allows for the sharing of information in practically every way, and everyone can contribute. Sure, it has some limitations and many channels are so small that no one takes notice, but this is the case with many networks. No matter how broad the user base, there will be those who get the most attention.

Finally, social media may change over time, and so might the definition. In 2022 itself not much is likely to change (at least not dramatically) but keep an open mind for new sites and opportunities. You’ll surprise yourself with what you find and what you can learn.

Social media companies thrive off of unending growth and engagement. They heavily measure themselves by these points. The valuation of most social media companies when it comes to investment is not necessarily what the companies are worth, but what they’re going to be worth and what they could be worth. Being able to engage with billions of people in some way is valuable, as is having data on their connections, interests, and more. Furthermore, the more people on a platform, the more people that want to join it. Would you join a platform where no one was active that has no one you know on it? Likely not.

Yet what is the rate of growth, for both users in general and for each network? Let’s take a look: 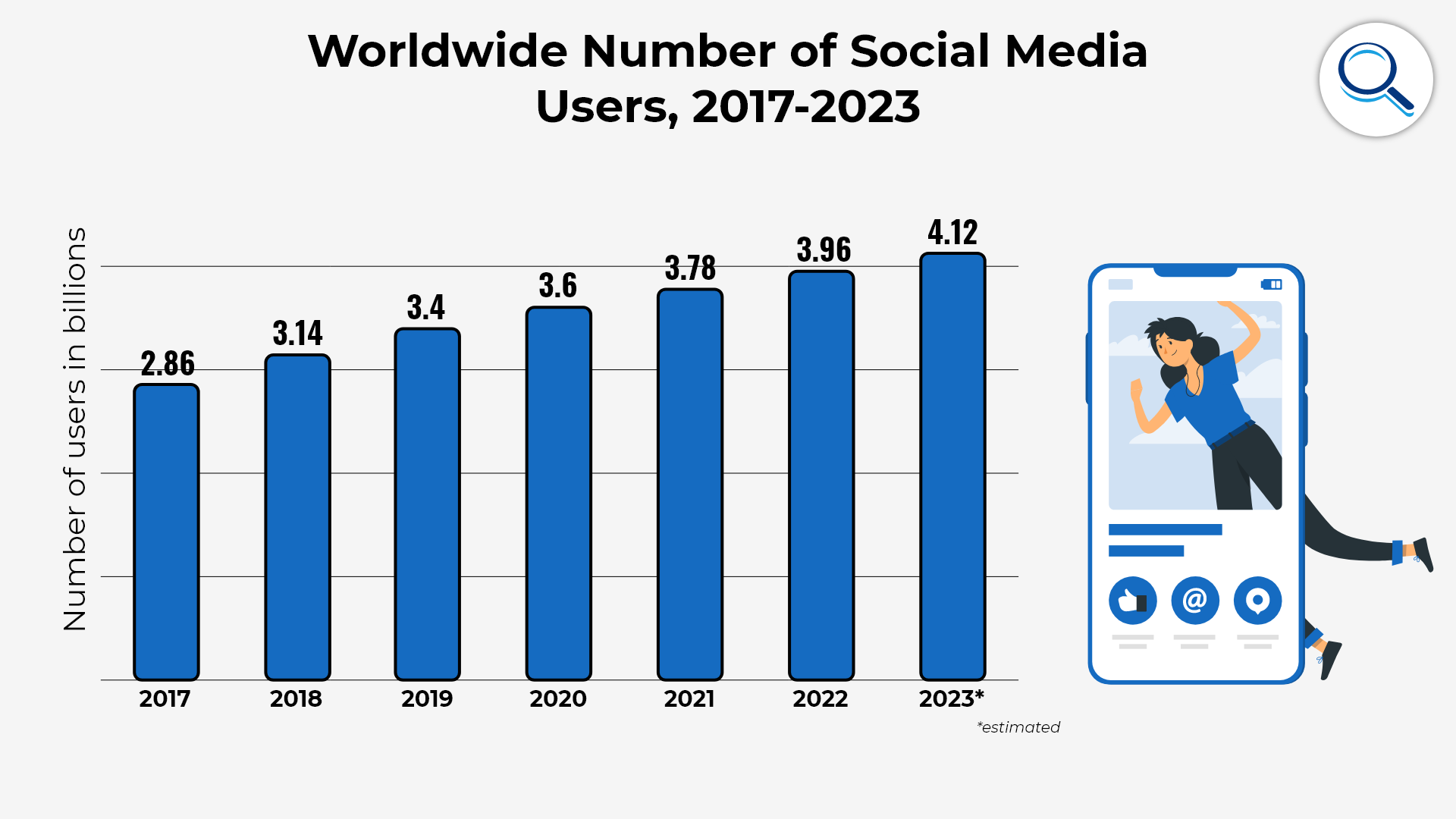 While there are certainly more individual social media companies than those listed above (we didn’t even mention Instagram), we could spend all day discussing them and the numbers aren’t always so reliable. Suffice it to say, there are always ups and downs in the world of social media, users will happily and easily switch platforms if they find a good reason, and momentum is king. There might even be a new contender in 2022 that takes the world by storm. We’ll just have to wait and see.

Now that we have looked at growth, what can we say about engagement? After all, if users just have an account and aren’t doing anything with it, that’s hardly any good for the social media network in question. People are less likely to use a network their friends aren’t using. Ads won’t show for people who never open the app. Data cannot be collected if there is no input. Engagement matters, and we should pay attention to who is using what and when. Here are some facts on the matter:

What Do People Use Social Media For?

By now it’s obvious that many people use social media. Just a look at your own follower lists and feeds will tell you that. Yet what do people use social media for? What’s the purpose? What keeps people coming back? These are the far more interesting questions. While there is no complete answer, here are some of the more interesting things we’ve found: 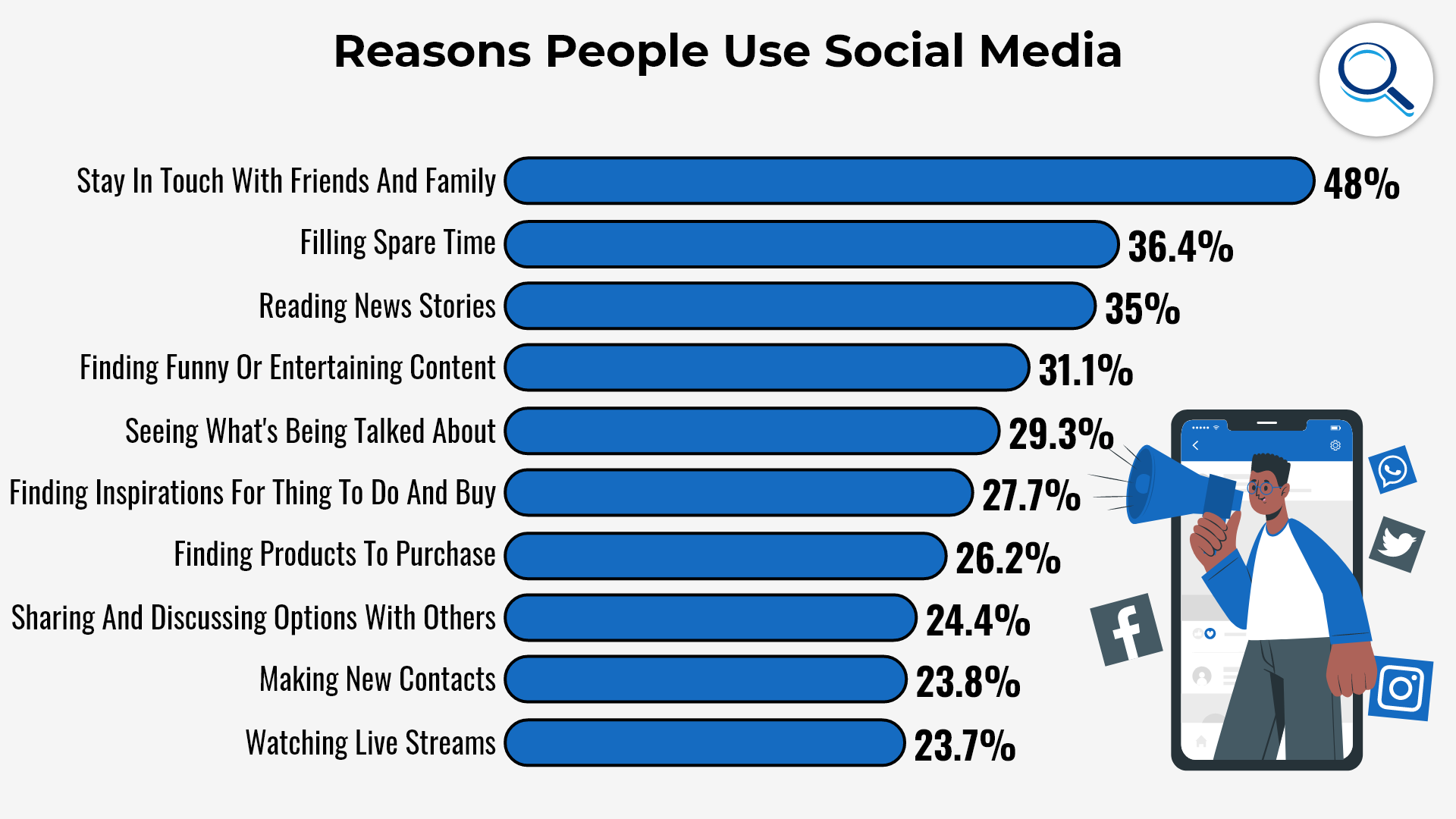 Naturally, none of the reasons are mutually exclusive. People might be looking to do several things at once when they log on. Often people might not even know what they want to do when they log on, though they’ll funnel themselves into some of the above activities once they’re engrossed. People also aren’t the best at self-reporting their activities, so keep that in mind.

What do people use to access social media? Are they more active on their smartphones or do they prefer to stick to their computers? Do they act differently on different devices?

Let’s find out, and you might be a little surprised:

Breaking Down the Demographics

Much like other sections, we could go on for much, much longer if we wanted to talk about the breakdown for every single demographic and every social media app. The data is there if you are interested. Though suffice it to say the point is made: there are differences between audiences on social media apps, and companies and individuals alike should note this when appropriate.

What are some of the differences between social networks? They obviously compete, but user bases will have different opinions about different networks. They may express them in discourse or usage, but it will be an everlasting struggle, as long as social media exists.

Once one social media network adopts a feature, it seems inevitable that every other network with at least a little crossover (or even none) will adopt a similar feature or technology. Think about all the “story” options on social media apps that allow for a temporary post or update of some sort. Think about how video has been available with practically every option. Even private messages exist on apps that one would not immediately think of them. Advertising methods also have their own form of osmosis and will progress in whatever both makes money and is acceptable to users (as in they won’t quit that platform due to advertising).

We also have to look at their relative popularity. Here are the latest numbers on that: 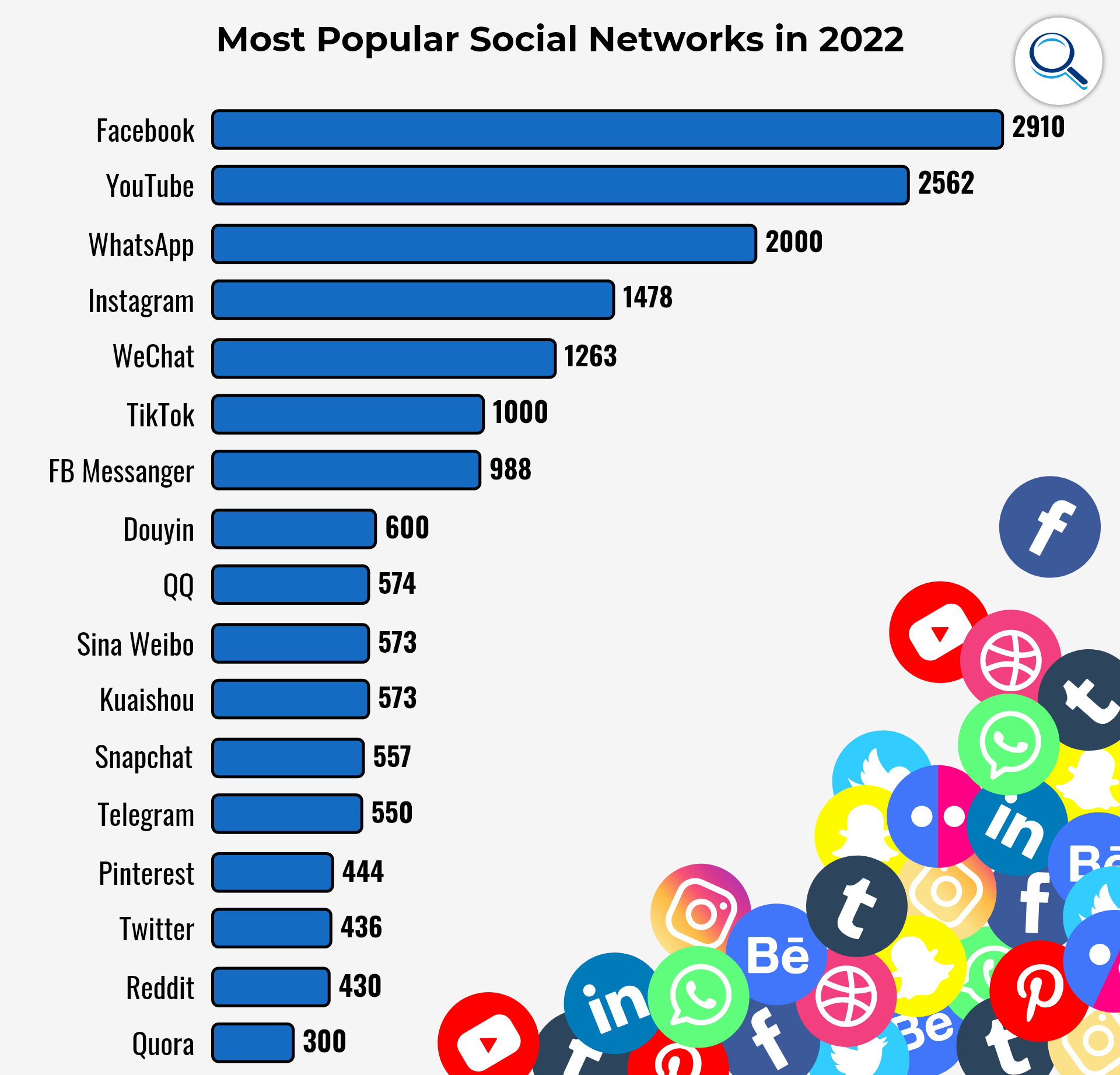 While there are few surprises to anyone who has been following the overall social media landscape for some time, this data does show a few things:

Naturally, internal strategy and marketing will also vary among networks and companies, though those are harder to parse and are quick to change. Unfortunately, we aren’t privy to company secrets. We are more likely to see the results of the differences in strategy than be able to notice them in real-time, at least in full.

One clear line between social media networks and companies is their desire and focus to change. Some will be constantly experimenting and expanding into new features and markets, sometimes to little success. Others might instead be focused more on trying to perfect what they do have, expanding only into features and technologies that enhance the main experience and draw. You might notice experiments, of course, but they are more tightly controlled.

For example, Facebook has the userbase to try anything and afford it, at least to a certain extent. Meanwhile, Quora is likely to stay in its lane and keep up the same services they always have. Reddit by its design can only do so much and is unlikely to expand to other sectors of the tech market.

Users will come to associate an app or network for particular purposes. If there is already an existing service that is used, people are unlikely to switch unless there is a strong incentive to do so. Prospective influencers will try to get in while the ground is low, so to speak, but they aren’t indicative of the entire userbase.

Chances are you are only used to social media in your own country unless you have made extensive travels in the past. While the internet allows us to connect to people all over the world, that doesn’t mean that we do so. People are more likely to stick with what’s comfortable. Users probably mostly have friends in their area, though social media has certainly changed how we communicate with people who have moved away from us.

Still, there are boundaries to consider. This is especially the case with China, which due to censorship laws and measures collectively known as the “Great Firewall” make many social networks such as Facebook and Twitter mostly unavailable. Instead, you might see some of the following: 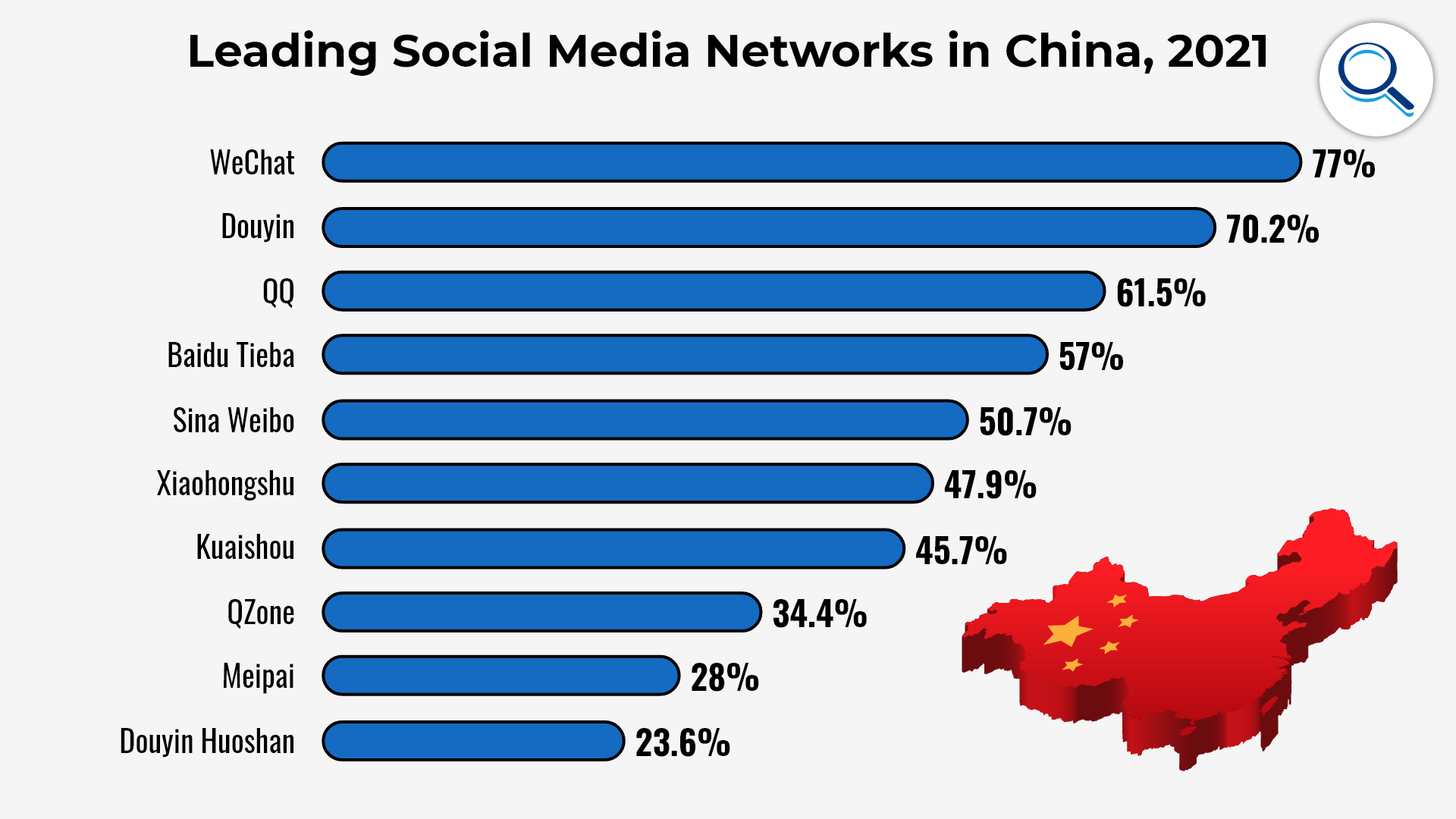 You could look into any of them and learn a lot, though they too are constantly changing, much like the rest of online culture. Some notes about these networks or variations of the networks we know, or just facts about social networks internationally:

Finding more exact information on these sites can be difficult, but we hope that you have a general idea of what is going on and how different it can be from what you are used to. Pay attention to what people are saying online, and don’t be afraid to reach out, especially if you don’t use your account much otherwise. You’ll learn more about the world and the platform that way.

Is there anything that can be expected in 2022, especially given the current political and technological environment? While it is too early to make complete predictions, here are a few things to look out for:

Further Expansion and the Future of Social Media

So where do social media companies go from here? What can we possibly expect from the future of the industry and what users will demand from it?

Social media is complex and evolving. There is no saying exactly what the future holds for the platforms or their users, but we hope that you have a better understanding of where things are in 2022. You might change your habits in response to some of the above statistics, which might be a great idea. Get your own time back or use social media more intelligently in the future. Whatever will work for you, we support that. May you continue to find interesting notes and facts about this new topic, and may social media develop in a way that’s helpful to you and other users around the world.