Having an excellent WiFi connection, no matter where you are in the home, has become a near-essential fact for modern life. It is especially true if you have a large home, have quite a few smart home or internet of things devices installed in the home, or regularly use your laptop or phone in your upstairs bedroom.

And while there have been solutions for this for some time now in the form of extra routers or WiFi range extenders, they are sometimes not enough to provide a truly equal WiFi experience throughout the home. Fortunately for you, if you are having this trouble, there are a wide variety of WiFi mesh systems to choose from that should allow you to get precisely what you want and not have to worry about WiFi for years to come (so long as you have a good ISP and service deal to work from).

How does a WiFi mesh system work? You install a single router in your home, but also have a series of nodes (the number is variable based on your package and needs) that act as relays and effectively create a "mesh" network that ensures the entire home is covered, reducing loading times and ping rate in the process. They are also easily adjustable and expandable if you find you want a bit more coverage. 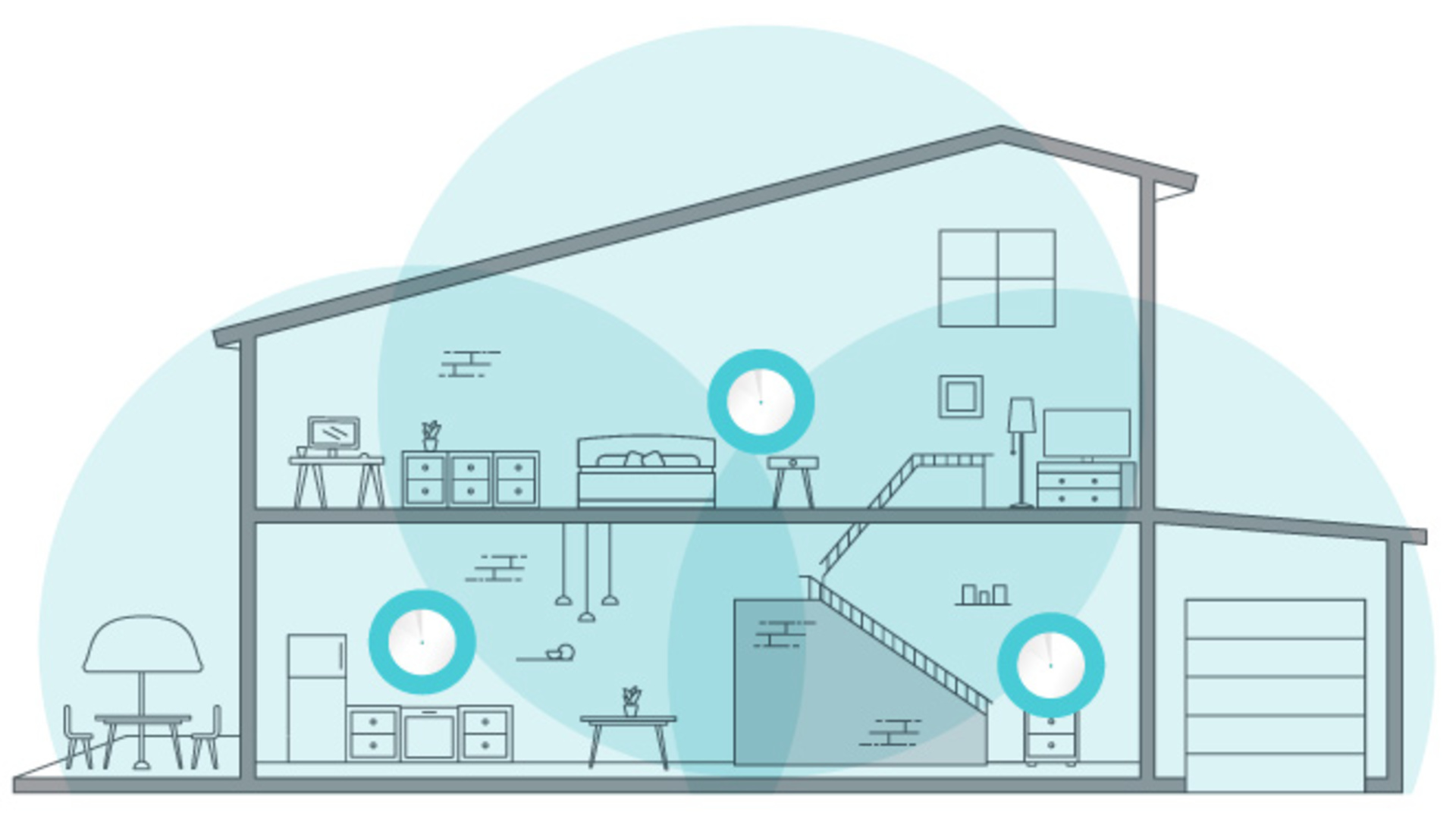 Here are our top five choices for a system, each filling a niche and priority that some readers will fall into:

If you don't want a specialized WiFi mesh system, want a balanced choice, or simply want to go with our all-around recommendation, we advise you to go with the Netgear Orbi. It is one of the most popular models in the industry with a reputation for excellent speed and reliability. Not only does it use the best technology available (at least at the time of its production), it also uses smart handling of information which makes the most of that technology to provide your home with the best possible experience

Yet there is one other reason we picked it as our all-around option: it is easy to set up and use. In most cases, the process will take you a matter of minutes, and you will be able to control everything from either your phone or browser, just like you can any other smart device. When you get into it, WiFi can be technically complex, but the Orbi makes it easy for you.

So, what does the Netgear Orbi have working inside of it? The router (there are usually two paired devices to start with) will have six antennas, a top performance speed of 552.1 Mbps (more than enough for most homes), a Quad-core ARM 710 MHz processor, four LAN ports and a USB port for wired connections and devices.

Often the need for a WiFi mesh system in the first place comes from having a larger home that a basic router cannot cover. Yet there are still homes that might need a little something extra, perhaps to minimize the number of nodes or reach additional areas outdoors (maybe a small study shed in the backyard). For these circumstances, we recommend the Linksys Velop, which uses three default units (with additional units available for expansion, of course) to provide coverage of over 6000 square feet, which will be more than most people need.

Compared to the Orbi and other mesh systems listed here, the router does not need to be in a central location. Each device can relay clearly to the next one, allowing for a much wider array of configurations and removing some potential problems with setup and configuration.

The Linksys Velop has a quad-core ARM 710 MHz processor, 512 MB memory, and 4GB of storage. It can provide download speeds of at least 500 Mbps. It has six antennas inside of it and uses an 802.11ac/tri-band router-extender kit.

While you might get sick of hearing about variations of the Netgear Orbi on this list, we nonetheless find that the company often has the best mesh system routers available, and has truly established itself as a dominant force in the industry. What we are talking about here is their most advanced and modern model, the Netgear Orbi 6. If you are looking for one of the best routers you can get without considering price or necessity, you do not need to look any further.

The sturdy yet sleek design of the device lets it have 4 LAN ports for easy access. Naturally, its main attraction is its use of WiFi 6 technology (802.11ax), the cutting edge, and the fastest option available. So much so that many devices aren't even equipped with it yet.

As of writing this, it costs most consumers about $700 for the modem, with additional costs for mesh network nodes and any additional setup costs. The wireless speeds can reach over 750 Mbps depending on distance (more than your household will likely ever need.) The device has 1GB of RAM, a Quad-Core 2.2GHz processor, and 512MB NAND Flash Memory, all of which are far above the average router or mesh system.

It was actually a tough call between the Google Nest and Netgear Orbi for our all-around recommendation. However, even though there are some cheaper options for a mesh router, we still think the Google Nest is the best option for the money given its functionality, ease of use, and ability to connect to additional services. Lauded at release for being one of the best options available when it first came out, it remains an excellent option for many households.

And naturally, being a Google product, it comes included with Google voice assistant and can easily hook you up to other Google services and features. If you already have Google as a major part of your life, choosing Google Nest might make things even easier for you on top of the value you are getting.

Google Nest WiFi comes in packages of different numbers of nodes (on top of the main router). It will be able to automatically choose for you whether your device would do best with a 2.4GHz connection or a 5GHz connection. Speakers and voice assistant features are included, but the sound quality is not as good as dedicated or more specialized devices. There is a LAN port in the router, and the system can handle up to 100 connected devices. Google Nest has 1 GB of ram and 4 GB of flash memory.

There are many reasons to want a mesh system, and for the most basic needs, most systems on the market will do the trick. But what if you want something more, or do not want too many extra devices cluttering up your home despite your love of the high-tech? In that case, we recommend the Netgear Orbi Voice for your household. It provides all the functions of the Netgear Orbi (although perhaps not those of the more advanced models) while also adding speakers and a microphone to the system and Alexa voice control.

This, of course, adds many possibilities, making it an internet access point in its own right and making it easy to get. If you do not have a device like the Amazon Echo or Google Home already, then the Netgear Orbi Voice might kill two birds with one stone for you.

Selecting and installing a WiFi mesh system can be a major investment of both time and money for some families, so we want to make sure that you do not have any doubts about your selection. We hope that one of the above selections is a good choice for you, and we hope that you also note that the market keeps changing and the technology keeps getting better, so even if you decide that a mesh network isn't for you at the moment, it might be great for you next year or beyond.