Smartphone Statistics in 2022: Everything in Your Pocket

Think for a second about the smartphone you either have with you right now or are reading this article on. What can it do? How much did it cost you, and how much money are you spending on it every month? How many people have one just like yourself, and how many people do you think could go without one for any length of time? Where do you think this massive industry is headed?

There are so many questions that relate to these small computers (as they now are) that it can be easy to get lost in them. Yet learning more about them as consumers is key to learning more about both the modern world and how we can make the most of smartphone technology.

Here are the main facts and statistics you need to know about smartphones in 2022:

To understand the influence of smartphones in the modern world, you need to understand just how much money moves from smartphones, and due to smartphones. Mobile app stores bring in billions each year (more information to follow), and investments don’t stop for new potential innovations in both the hardware and software spaces, if only in the hope of being on the ground floor of the next new Tinder or Pokémon Go. Much like computers and the internet in general caused a boom a few decades ago, smartphones are the place for many to invest.

Here are the main statistics you should know about the smartphone industry in general: 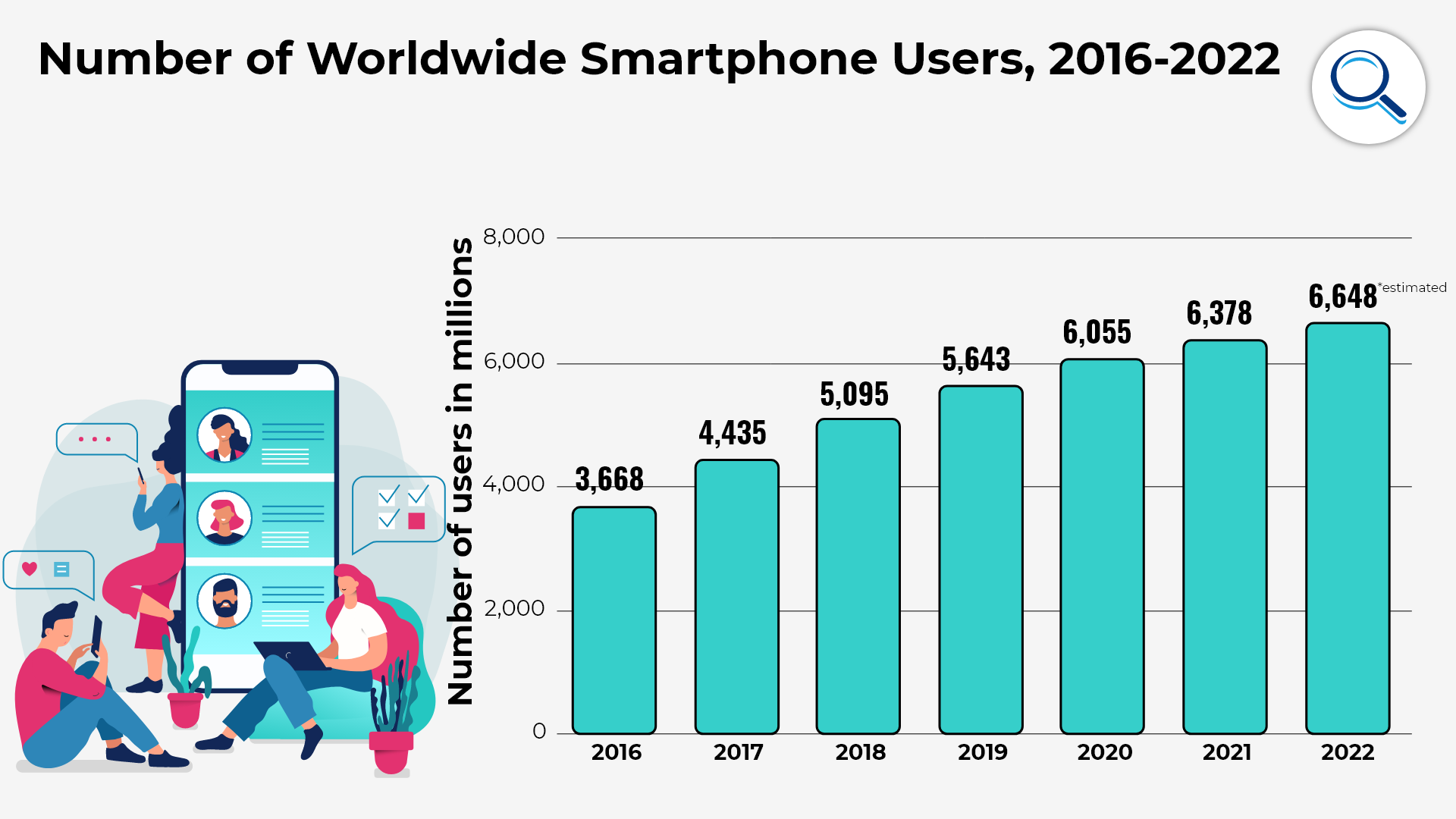 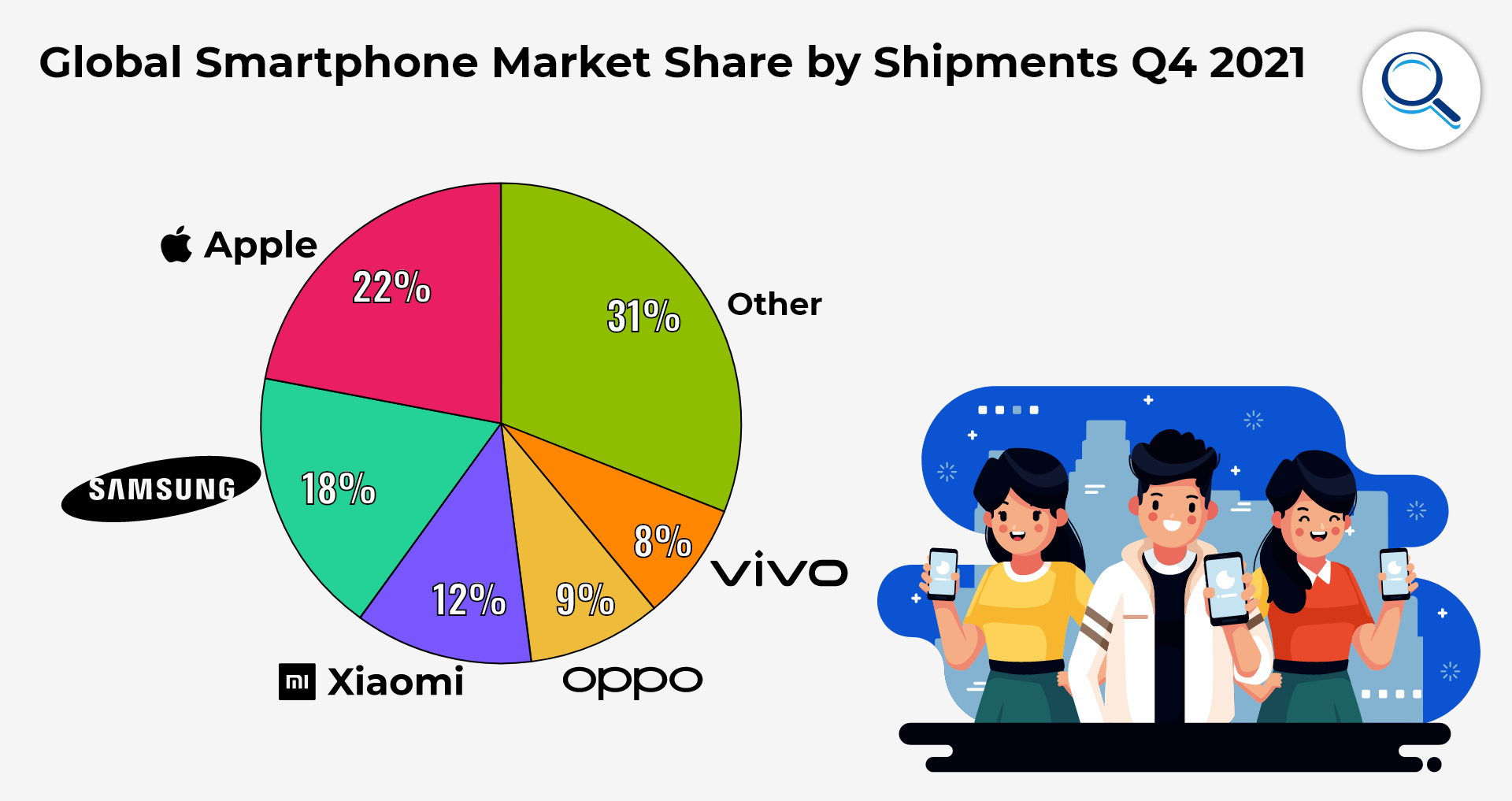 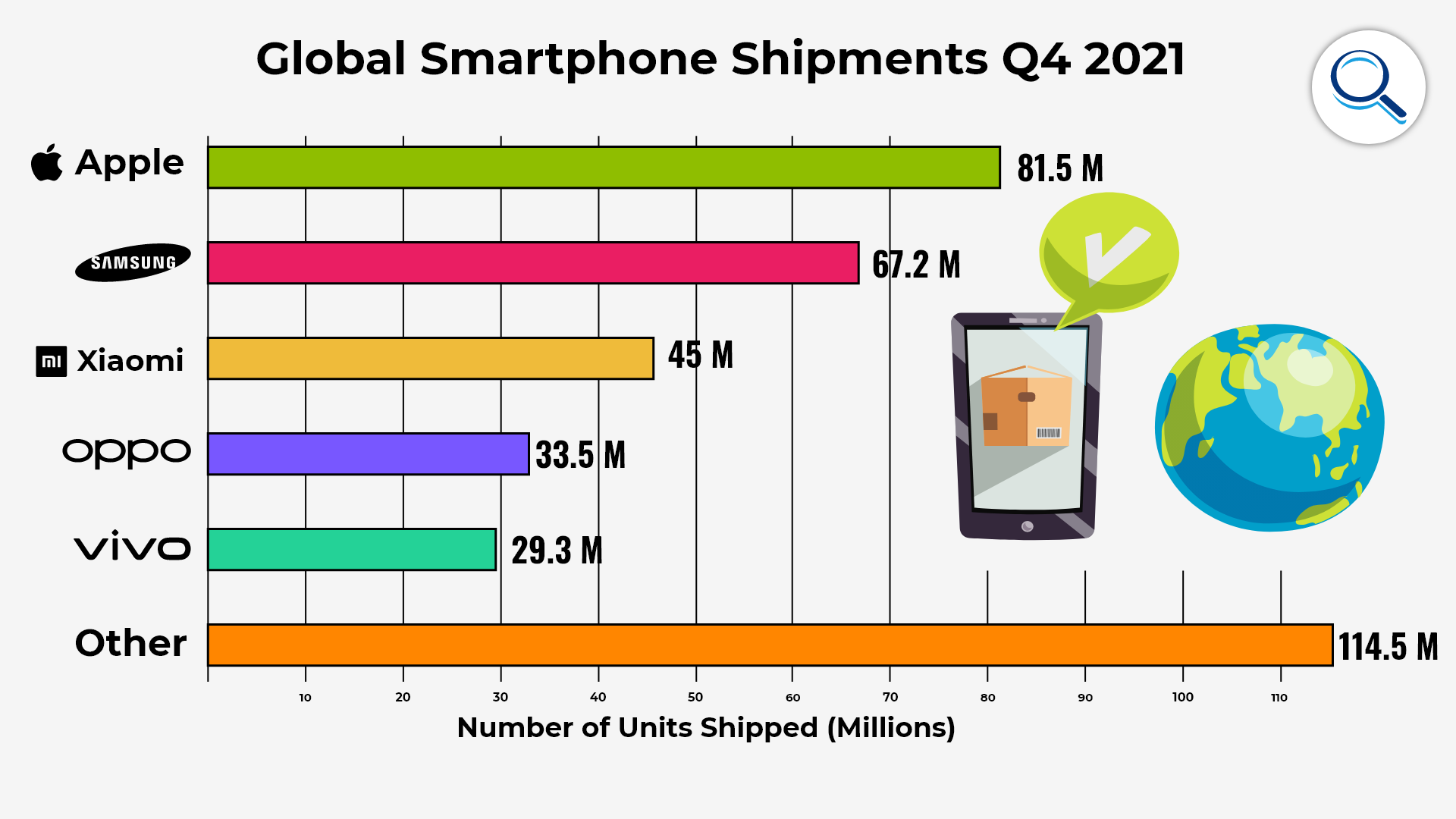 If you’re just a smartphone consumer or user, we recommend that you don’t focus too much on who is leading and instead focus on which phone can provide you with the best experience. Yet which phones are popular can tell you what features people want, or at least what marketing tactics are working. This in itself can be incredibly useful information.

Who Is Using Them? And How Much?

The most interesting thing about smartphones over the last decade is the fact that they’ve become a near-necessity to live in the modern world. Some people are outright addicted. People feel uncomfortable without them. Being constantly connected almost feels natural.

Conversely, the number of landline numbers (non-business) has decreased drastically over the last few years. This is mostly a direct result of increased cell phone and smartphone usage. While there will likely always be some in use for security and reliability reasons, we’ll soon see landlines be almost archaic in modern culture.

Here are the numbers to paint a more complete picture: 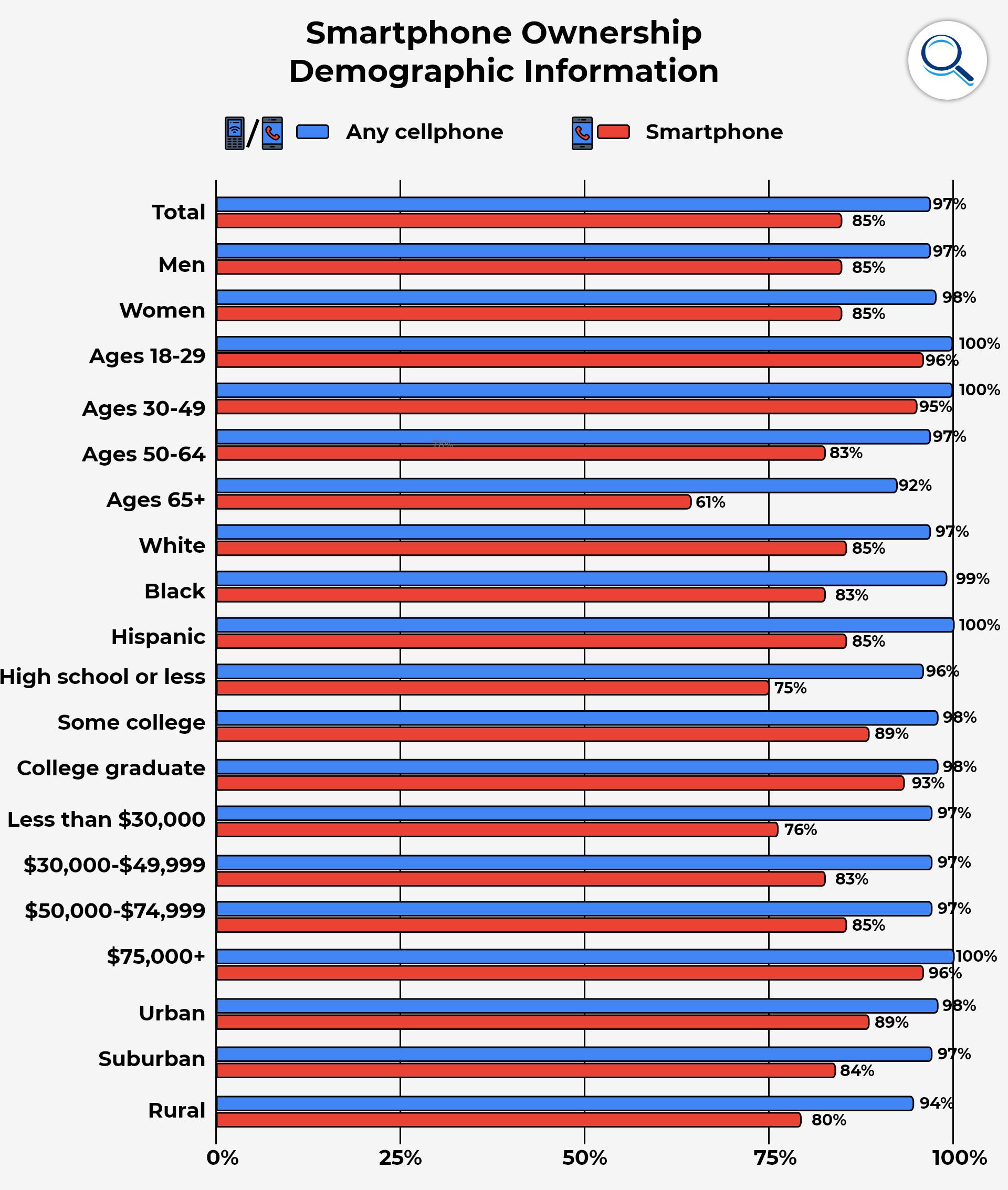 The market in the United States and most of Europe is entirely saturated, which means that growth won’t be so easy for smartphone producers. China and a few other Asian countries are likely next to follow (more on that in a moment), which means that smartphone producers and app developers, and marketers by extension will need to consider new markets and methods to reach those new markets. Will they try to make more affordable options, or will other methods be used?

Here are a few statistics to give greater context to these questions and considerations: 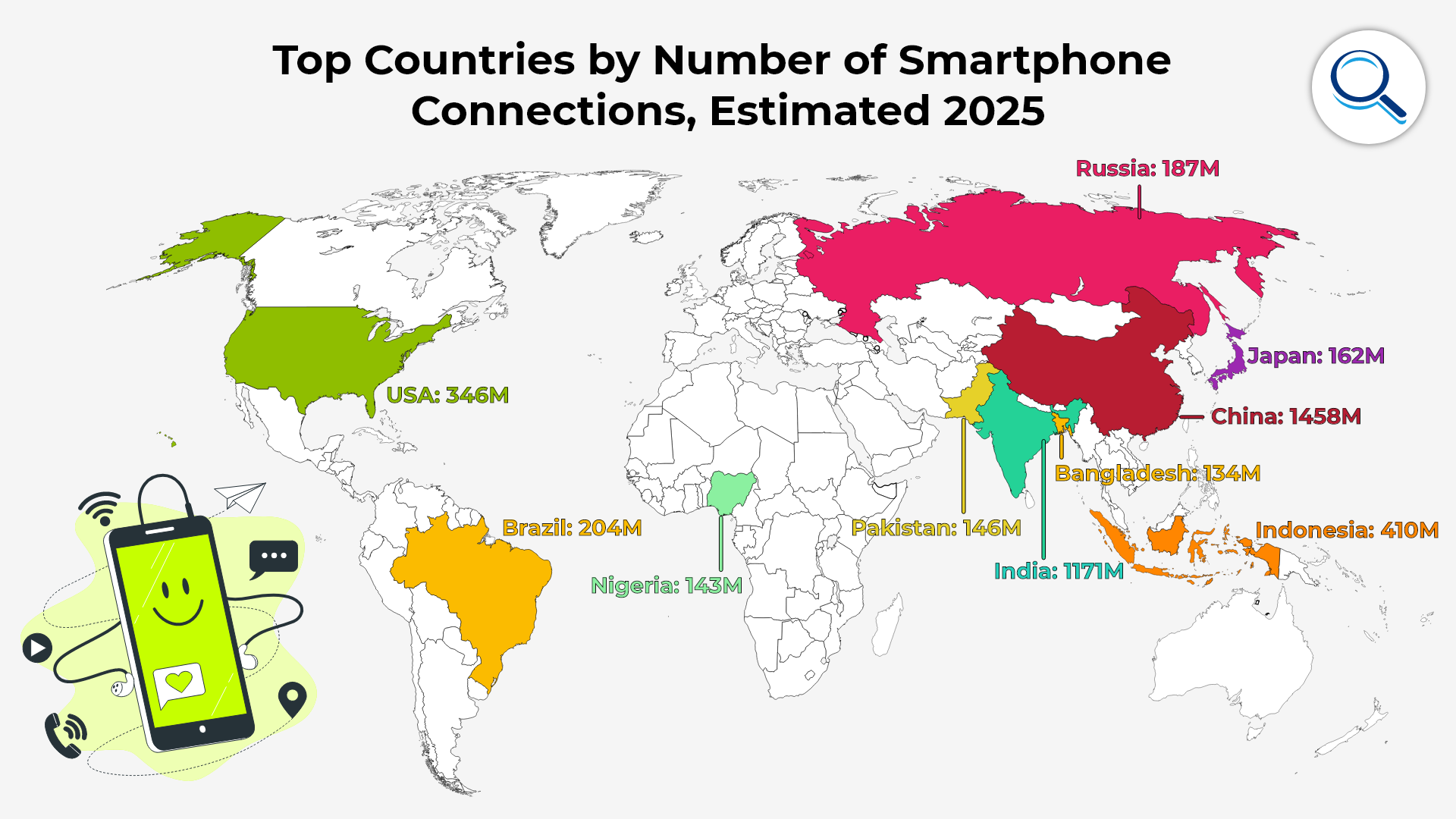 Quick obsolescence is just a fact of the smartphone market these days, both in terms of hardware and in terms of apps. Developers of major apps constantly need to refine and reinvent themselves to keep up with innovators, and in a matter of months one of those competitive innovators could take off.

Yet while this is true, it is also true that some companies hold on strong and some platforms are ruling the industry.

Here are a few statistics on smartphone hardware, changing platforms, and the constant stream of new ideas:

While models will come and go, we should at least comment on an ever-increasing product lineup in the smartphone world, despite the relative lack of statistics in this space.

While there were originally a few other mobile operating systems in play (like the poorly supported Windows Phone 8), Android and iOS have been effectively dominant over the industry, and as such over many people’s lives.

Despite the hardware, we hold in our hands, apps, and the relative ease by which they are acquired, are what truly give smartphones their versatility and their ability to be relevant to every part of our modern life. Without them, we would be calling people and not much else (even preloaded apps on smartphones are still apps). Mastering their creation, implementation, and adjustment is key for businesses to succeed in the coming decade.

To go into everything about the app market would be an endless exercise if an interesting one and the minute data changes so often it wouldn’t be of much use. Instead, here are a few key things you should know about apps and their place in the world in 2022: 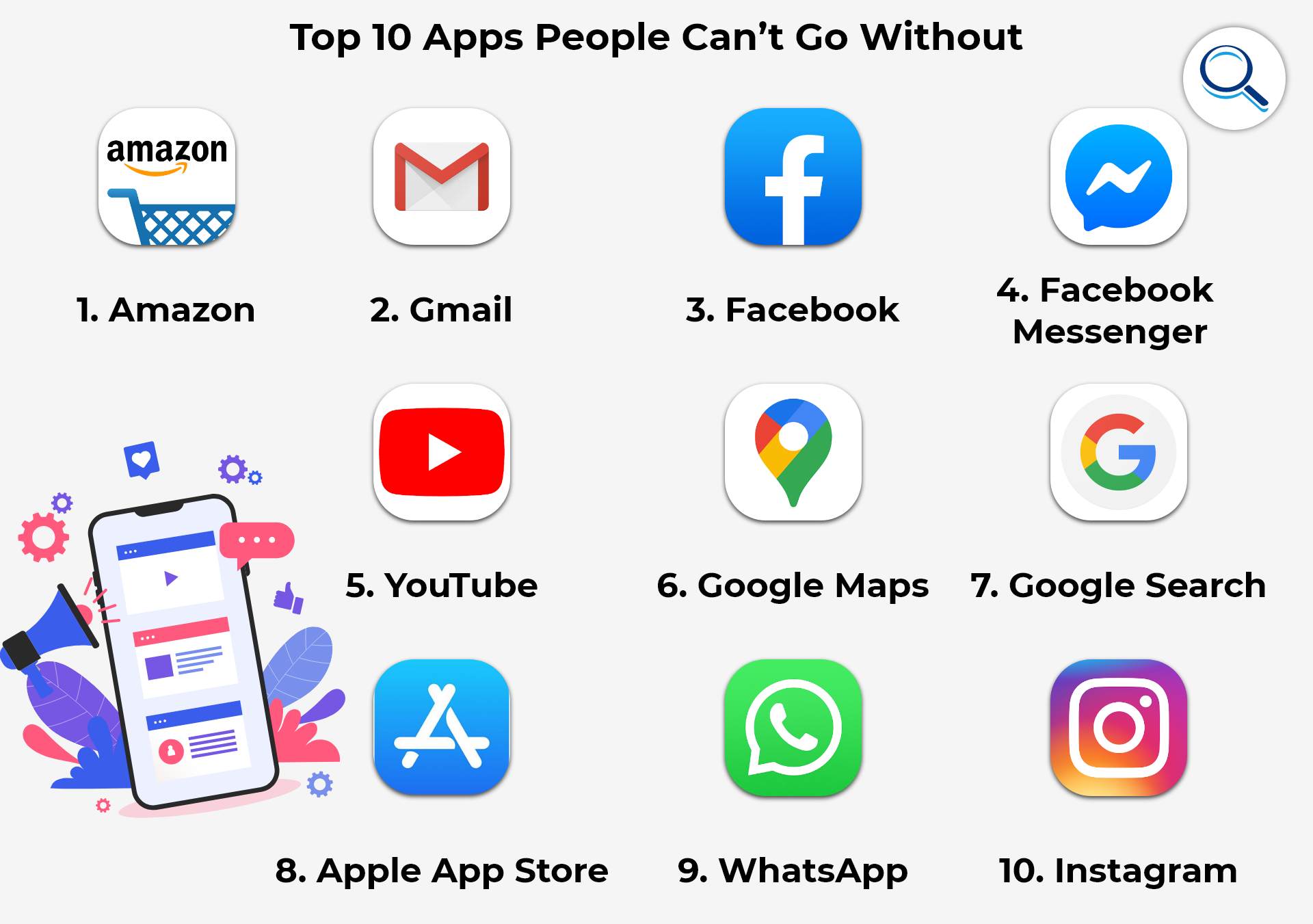 While you’re almost certainly familiar with 4G connection technology on your smartphone and might have been for some years, progress marches on, and 2022 will likely be the year 5G takes over in many regards. Here are a few things to note down:

The Internet of Things

While the Internet of Things could be the subject of its own long article (and much more) and we do not want to divert too much focus on it, to divorce it entirely from the discussion of smartphones and smartphone-related technology would be foolish. Smartphones are increasingly becoming connected to other aspects and gadgets of our everyday life, and here are some statistics and trends to prove that point:

Every second 127 new IoT devices connect to the internet, and that number is only expected to rise. These devices can be anything from Smartphones to smart toasters.

Many of these devices require the use of a smartphone or another connected device. What will happen when modern convenience beyond communication requires a smartphone? Can this market sustain itself from a resource perspective? What if something happens to sensitive supply chains? And will there be backlash over potential vulnerabilities in these networks? These are the questions that need to be asked and at least partially answered.

More than any other type of consumer product, nothing has captured the public like the smartphone over the last 10 years. Being not only a product but a platform opens it up to a nearly endless host of innovations, advancements, and more. There is so much more to be studied and learned about them, and we hope that these statistics show you just how vital smartphones are to the future and also start to get you thinking about their current and future place in your life