Online Gaming Statistics in 2022: Interactive Entertainment in the New Decade

In one way or another, it is quite likely that you have played video games recently, and probably have done so online. While perhaps marketed initially as a diversion or toy for children, many games and the gaming industry itself grew up with their audience. Now gaming provides consumers massive online communities, cinematic experiences that can last for literal days, a wide array of platforms to choose from, peripherals far beyond a simple joystick and a few buttons, and programs to reach people of all backgrounds. And much of the experience is online and requires internet access to enjoy, for better or for worse.

Yet what does gaming mean to people, and how is gaming culture and time spent on gaming connected to the internet as a whole? As it turns out, there is a whole lot to investigate. Here are our main findings:

How Many Gamers Are There?

You might have an idea of a "gamer" in your head. Yet, can you have an accurate idea of 3.07 billion people worldwide by 2023? Because that is how many people are projected to play games, and that statistic can give you a clue as to how much gaming has caught onto the mainstream. Now many of those people are effectively "mobile-only" gamers, and we'll be getting into that a bit more later. However, gaming culture is bleeding into mainstream culture in a big way, and now more than ever, people are spending their free time gaming online.

While we don't want to diverge into a discussion involving in-depth demographic breakdowns in this article, just know that this is a worldwide trend.

Given the importance we place on internet speed and its effects on people's happiness and quality of life, we wanted to specifically look into how internet speeds related to gaming, how people felt about the topic, and what was necessary for people. While there are purely single-player games that still exist, in truth, most games require regular patches, common updates (especially online multiplayer games), or even a consistent internet connection to just play the game.

And gamers are often frustrated by slow connection speeds, claiming slow download speeds prevent them from accessing the games they want. Slow connection speeds interfere with their play or even commonly disconnect them from games. In fact, based on the graphic below, it is the most frustrating part about downloading games, and even more frustrating than when the process interrupts itself. 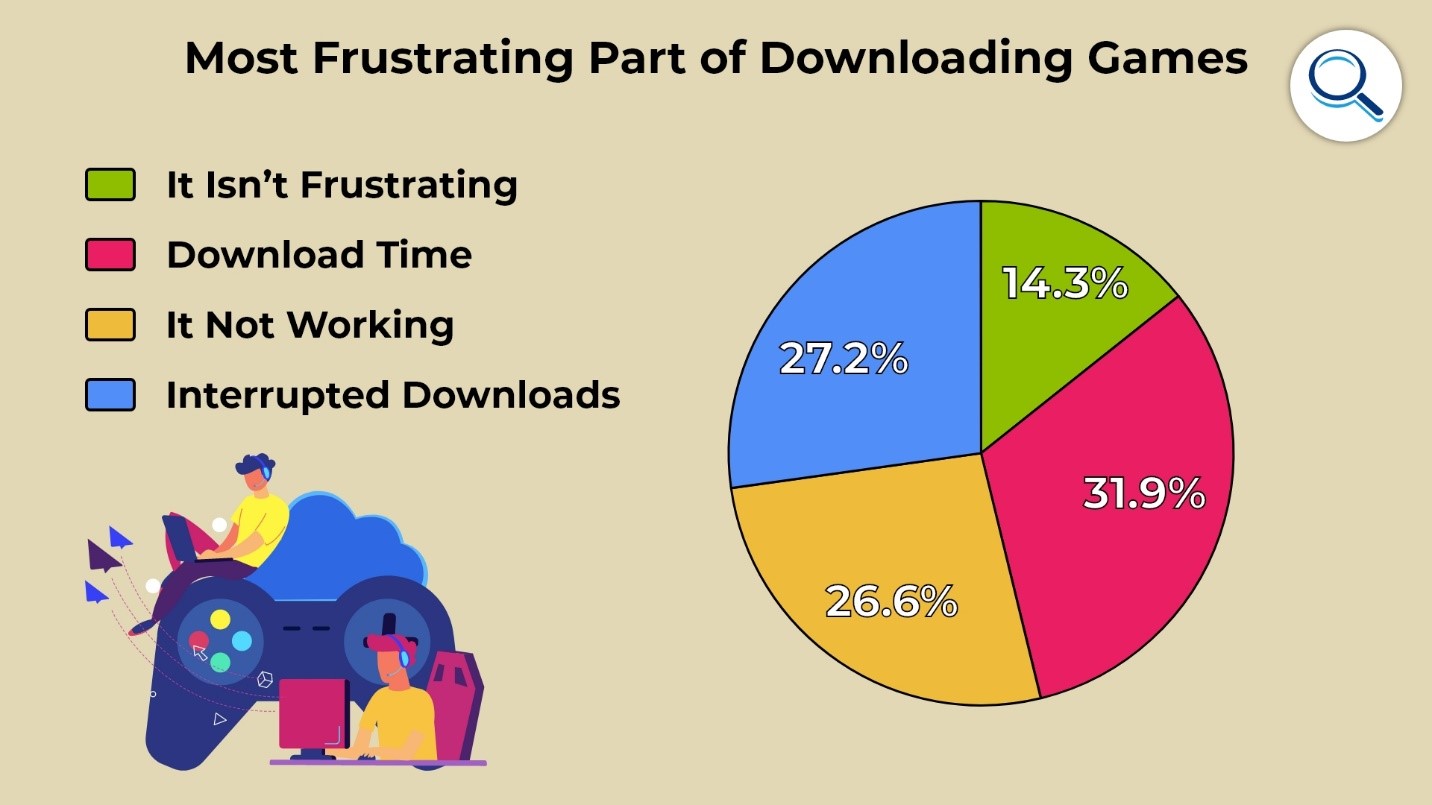 Something to keep in mind is that, according to the Entertainment Software association, even in 2017, 74 percent of all video game and computer sales were sold in digital format form. When something is sold in a digital format, that necessitates a download, and a huge one at that with some of the most popular games. In some cases, games when combined with downloads and extra content can result in 50GB-100GB to download (and much more in the largest cases), which means hours, if not days, of download times for even good internet connections.

These facts point to one thing: game producers and publishers expect people to have good internet connections.

The amount of time someone spends gaming can show a lot about their hobbies and how important they consider a consistent internet connection. An online gamer expects to have an uninterrupted connection, so they do not get dropped from the session or find that their download was ruined and have to start from the beginning. 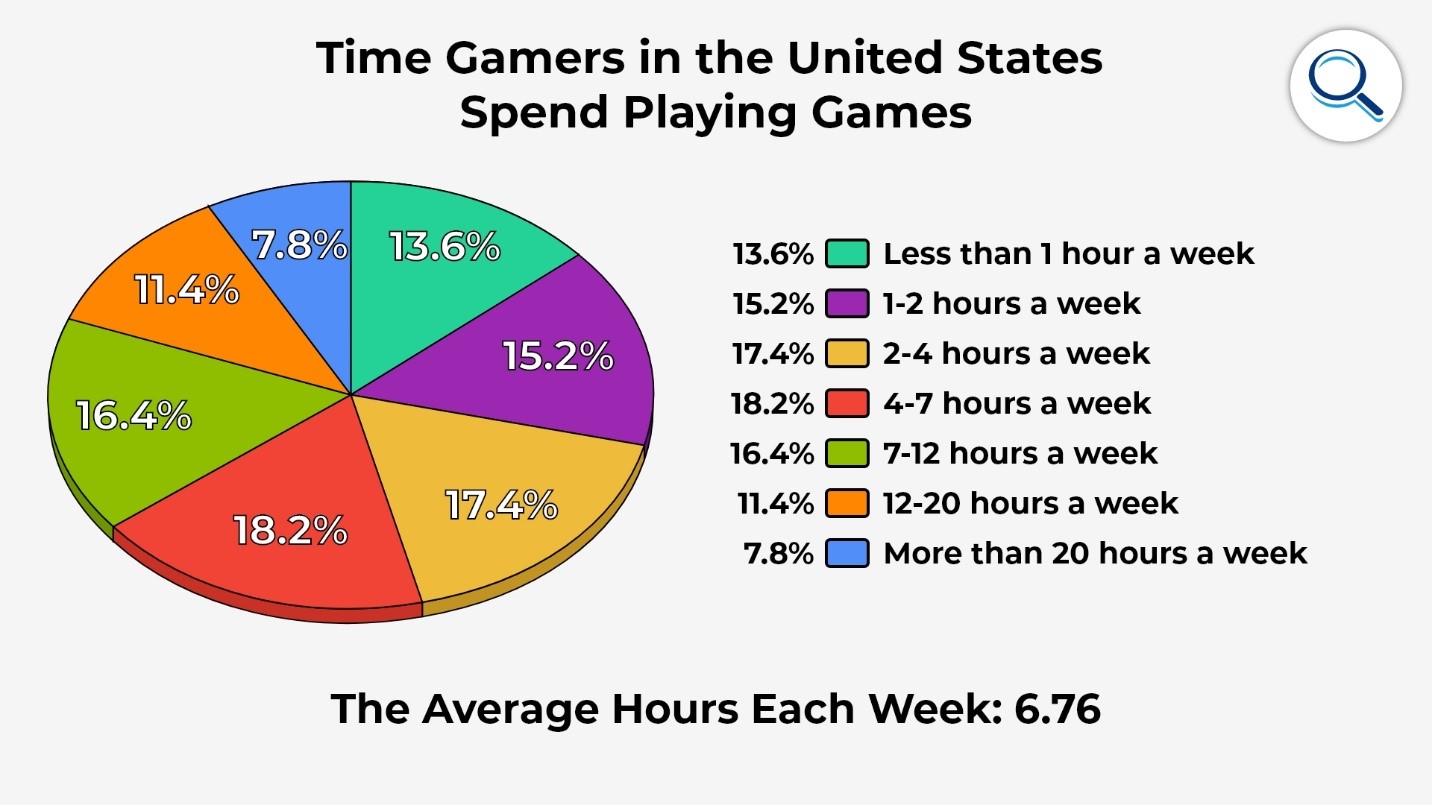 The above chart can give you a breakdown of the numbers, and as you can see, there's a decent part of the gaming population that could almost treat it like a part-time (or full-time) job. It's noteworthy that the time spent each week is a little less than it was in previous years, and keep in mind that more people are gaming to bring down the average.

While there is a lot more that could be said about the online gaming industry and multiple ways to break it down, the critical point we want to bring up here is that online gaming is a huge business. There is a lot of money going into it, and a lot of money consumers are investing in their hobby, which is all the more reason for them to want a good internet connection for it. Here are a few stats you should be aware of:

While we won't focus too much on industry specifics, please note that the industry has many more statistics to offer and that gaming is bigger than practically every other form of entertainment combined.

Yet while we have discussed online gaming as a concept, gaming ultimately involves specific games and play experiences, and just like any other form of entertainment, there are trends. There are multiple ways to consider this, but we decided upon peak concurrent players as our main metric. 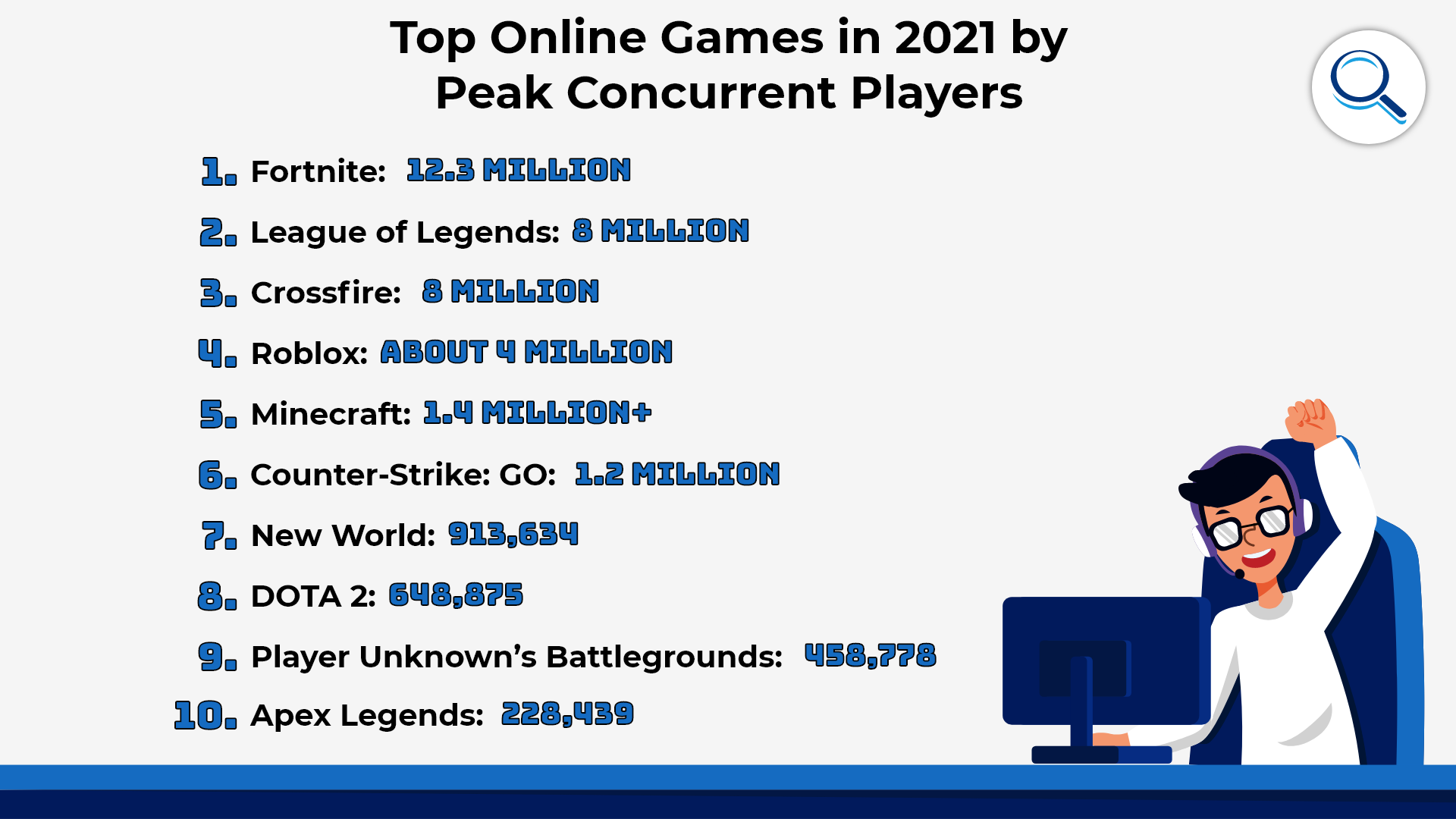 It is impossible to draw data for every game, and there may be additional concurrent players from other consoles or methods of play that shift the numbers. Ultimately our goal here isn't to provide you with the precise numbers (which are hard to measure) but instead merely to show you which games to watch and just the sheer size of the numbers we're talking about.

If you're a console or PC gamer, you may not notice it as much, but where gaming is picking up the most traction is on the smartphones nearly everyone has. It's an easy user base to access, and as smartphones reach the level of technological development to play more advanced games, more people are interested in finding something to pick up and play without carrying around a handheld console.

Here are some things you should know about this growing market: 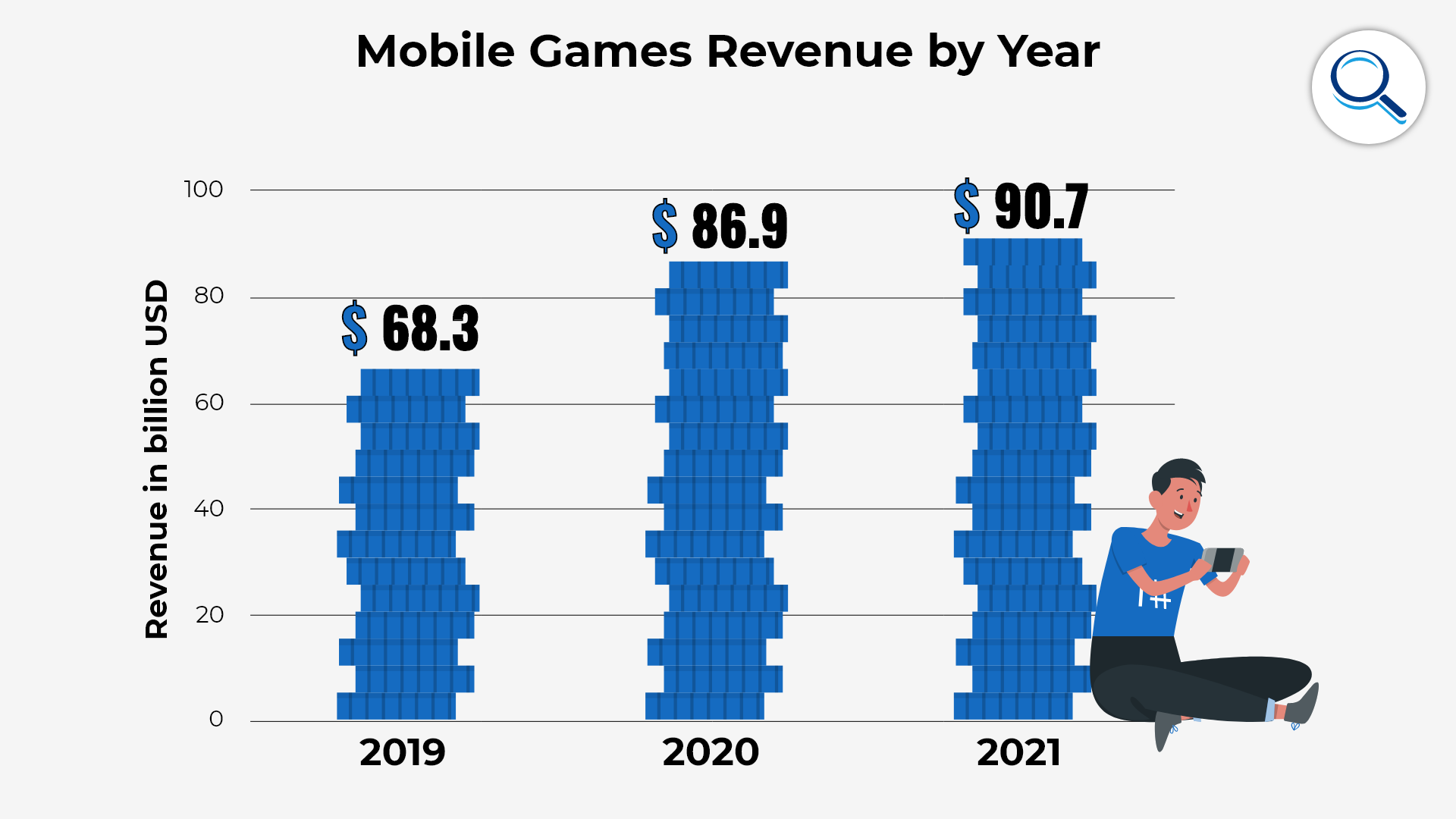 As for where that revenue comes from, the Chinese market is enormous (beyond that which even we would expect from the general size of the gaming market there). Following that, the United States, Japan, South Korea, and the United Kingdom are the biggest spenders. This generally does not come as a surprise, although we should expect game developers and publishers to continue to focus on these markets. 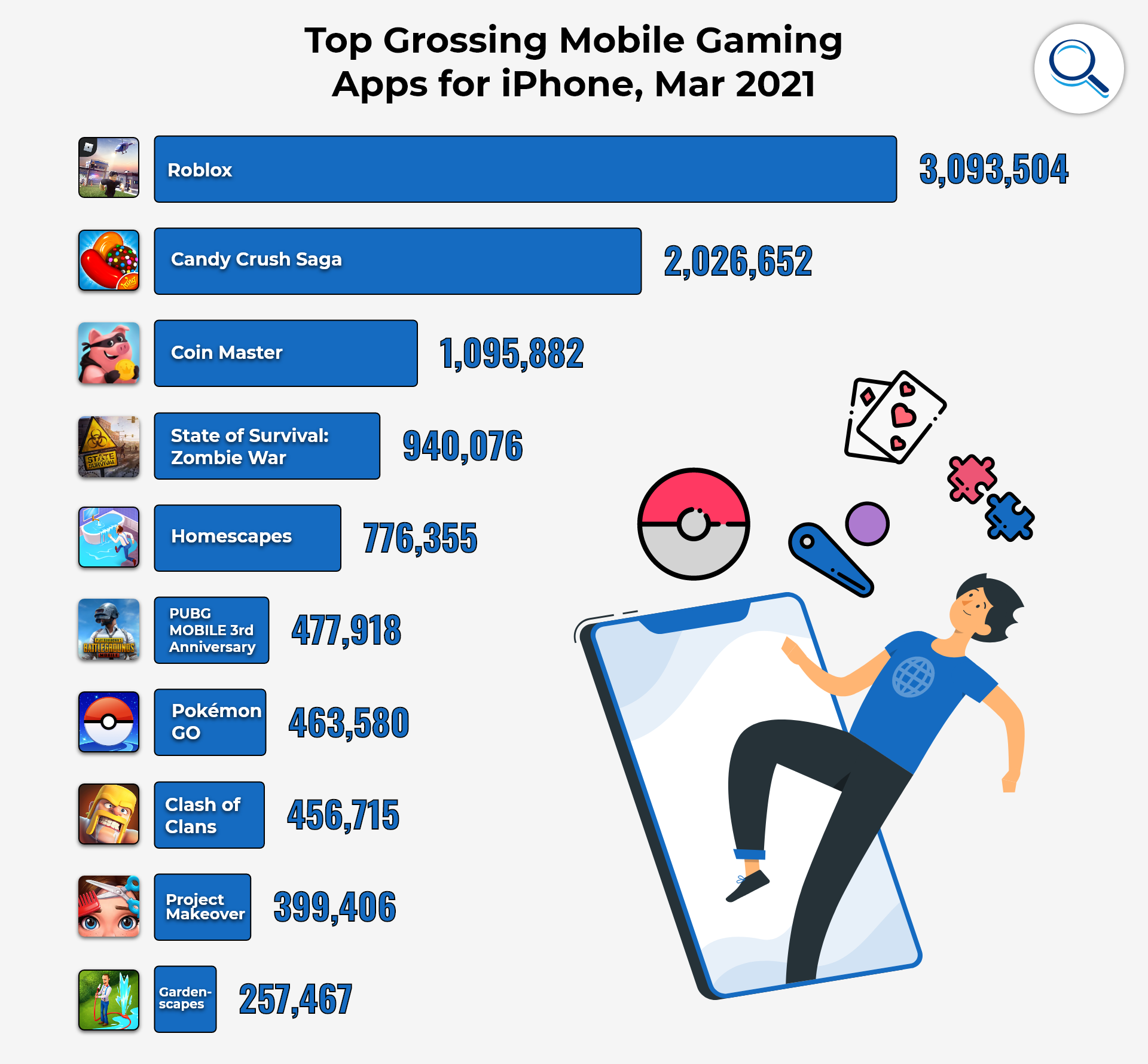 Ultimately, there is still much more that can be said about the mobile market, but we want your takeaway to be that mobile is king and will continue to be for the foreseeable future in terms of the casual game space. Yet as phones become more capable and able to play games more popular on consoles (Fortnite, for example, has a very popular mobile release), we will likely see the lines blur between the two, as companies try to make the most of profitable IPs.

People don't just play video games and put them down. Much like any hobby (or in some cases lifestyle), there are entire publications, online and off, dedicated to gaming. People will often watch others play games on streaming sites such as Twitch or via prerecorded content on YouTube when (and sometimes while) they aren't enjoying games themselves. People love to discuss games and make them a part of their lifestyle, and here are some more stats on this topic, divided into those about Twitch and those about YouTube:

YouTube, being another online hub of gaming, is another worthwhile place to investigate. In just the third quarter of 2021, people viewed over 8.4 million hours of YouTube Gaming content.

Yet, despite the rise of these platforms or websites, we would like to note that there has always been a fan base for gaming content. Gaming magazines and related content are on the decline, and video content has been taking their place, which was true even a decade ago. No matter what metric you look at, gaming content is becoming more popular, which we hope is the main takeaway for you.

Video games can be different things to different people. The total industry has split into several directions, some new and exciting, some growing beyond original predictions, and others traditional yet developing in ways that push the boundaries of what we think we can achieve. Whatever you find yourself interested in and find yourself looking for from your gaming experience, we hope you find exactly that.