Where Can I Find The Cheapest Internet In The World?

Internet access has quickly become a human right, according to many organizations across the world. It has perhaps been the most significant technological change, practically no matter where you live and the advent of improved communications technologies and the ability to access more information than has ever been available across the course of human history.

Yet whatever your opinion and hopes are regarding this trend, the reality is that most people around the world still must pay for internet access, whether through government-run providers, private ISPs, or something else entirely. Yet how expensive is internet across the world when comparing countries? Would it make a difference if you were to move or take an extended stay in another place?

We are here to look at the data and provide you with the answers and trends that you are looking for, so keep on reading.

The 10 Cheapest and Most Expensive Countries for Internet

Before anything else, let us get into the top tens, both to get an idea of where internet is cheapest and most expensive: 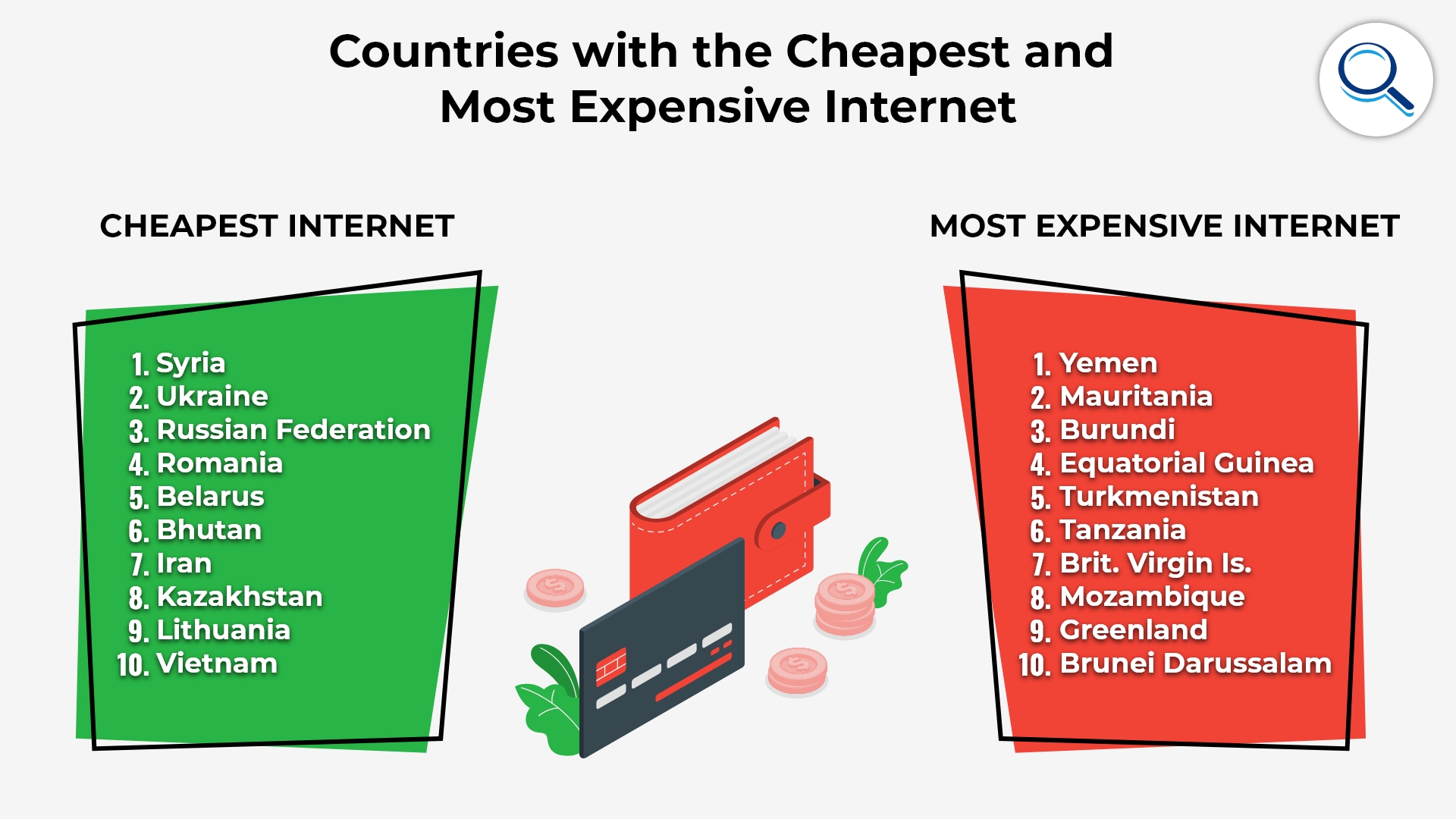 How We Measure It

"Cheapest" can be a subjective term, mostly based around which metric you are looking at. Is an internet package the cheapest by the amount of money you pay each month, no matter the download and upload speeds you have? Or is it based on the value of goods you are getting (paying $2 for a single apple often is not as good as paying $10 for ten apples)?

Cheapest by Average Cost Per Package

You can use this to determine which countries have the lowest monthly internet bills on average, barring all other factors. It is adjusted to United States dollars, so exchange rates and other economic factors such as inflation might be taken into account. Still, overall, the determination was made as fairly as possible. 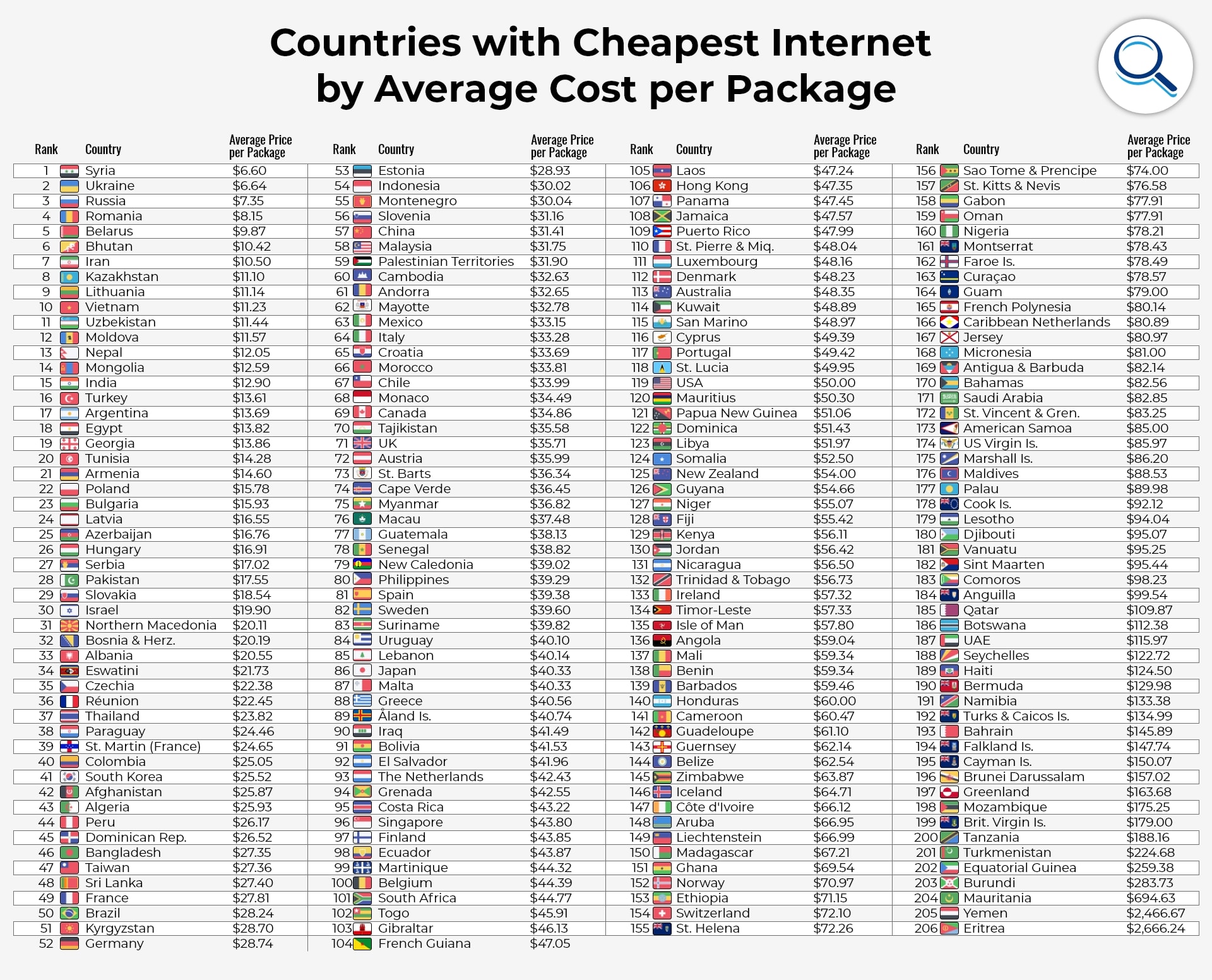 Cheapest by Average Price per Mbps

The price tag isn't everything, especially if all products and service packages are the same. If you were shopping for a car, would you rather have a used Toyota for $1399 or a new Ferrari for $1400? Both are cars, but there can clearly be a better value. And while the example above might be somewhat exaggerated compared to the real internet market around the world, the truth is that infrastructure and value matter and fast networks can change communities.

Therefore, take a look at the following list to see which countries provide, on average, the cheapest connections by average price per Mbps.

Now that we have all the data listed, it is time to look at some of the main takeaways:

Factors that Determine How Cheap Internet Will Be

Knowing what cheap internet looks like is one thing. Knowing why internet is cheap in one area and expensive in another is something else entirely. While this list is not exhaustive and other factors may pop up in the future, here are some of the key factors:

Some countries may have cheap internet, but also the internet is only cheap in some areas, or where there is internet at all. Not having available internet in some regions does not negatively affect the statistics shown in any way.

While some countries might experience times where internet access becomes more expensive by one metric or another, in total, the cost is getting cheaper. It is also getting easier for the average person worldwide to have a stable connection, even if it is from a wireless service.

We have every reason to be optimistic about the future of the internet and the future of internet costs as time goes on. It will get cheaper as time goes on, there will be more uses for it, and there will be increased demand. Additionally, with mobile internet and satellite internet becoming more common and feasible possibilities for billions around the globe, the demand for even faster and cheaper internet will skyrocket. It is quite reasonable to speculate that internet costs will balance out, and then we will look towards a brighter future of information technology.

Internet access is necessary for anyone in the modern world and is quickly growing even more important as additional vital functions are done online. This makes it important to know what costs are around the world, whether you are merely curious, thinking about moving or hoping to make significant changes in your area. Whatever your reason, we hope that this information has proved helpful and will aid you in your future decision-making.