How Much Internet Speed Do You Need To Mine Bitcoin?

Ever since the Satoshi Nakamoto, or a group of people using that alias, launched the Bitcoin blockchain network in 2008, the world has been abuzz about the potential this technology has to change one of the most important things in our world: money.

There is another reason why so many people are rushing after Bitcoins like it was in California in 1849 – Bitcoins have become extremely valuable.

Currently, nearly $40,000, up from just around $7,000 in 2020. However, getting to this price point has been a bumpy ride full of high peaks and low valleys, speaking to an inherent instability in the market, a natural phenomenon for something so new.

When most of us hear this, we often think, "where can I get some of these things?" Well, you can buy them on Bitcoin exchanges, or you can acquire them as payment in a transaction. Alternatively, you can go and get them yourself by becoming a Bitcoin miner.

As a Bitcoin miner, you help make the whole technology work, and as a reward for your work...free Bitcoins!!

Sounds fantastic, right? Hold on a second. While it's true there is money to be made in Bitcoin mining; it's a lot more difficult than it appears and requires a tremendous upfront investment. To understand why let's walk through everything you need to know about Bitcoin and Bitcoin mining.

Bitcoin is a cryptocurrency. It is a digital asset – in this case, a piece of code – that can be used as a means of exchange – in other words, it works similarly to money.

There are many cryptocurrencies out there – as many as 3,000 – but Bitcoin was widely considered to be the first and is by far the most well-known in popular culture. Its development has been credited to a Japanese man, Satoshi Nakamoto, although Bitcoin maintains this an alias "used by the person or entity who created Bitcoin." The mystery surrounding the creation and eventual release of Bitcoin is a fascinating layer of its story, but not one we will touch on here.

What's the Deal with Bitcoin?

Most of the buzz about cryptocurrencies is about their decentralized system of verification. This is in direct contrast to our current money system, which is centralized. A third party verifies all transactions.

An example would be Visa, which facilitates transactions between your bank and the merchant. However, at the core of the banking systems around the world, all transactions are verified by central banks. In the US, that's known as the Federal Reserve Bank of the United States. 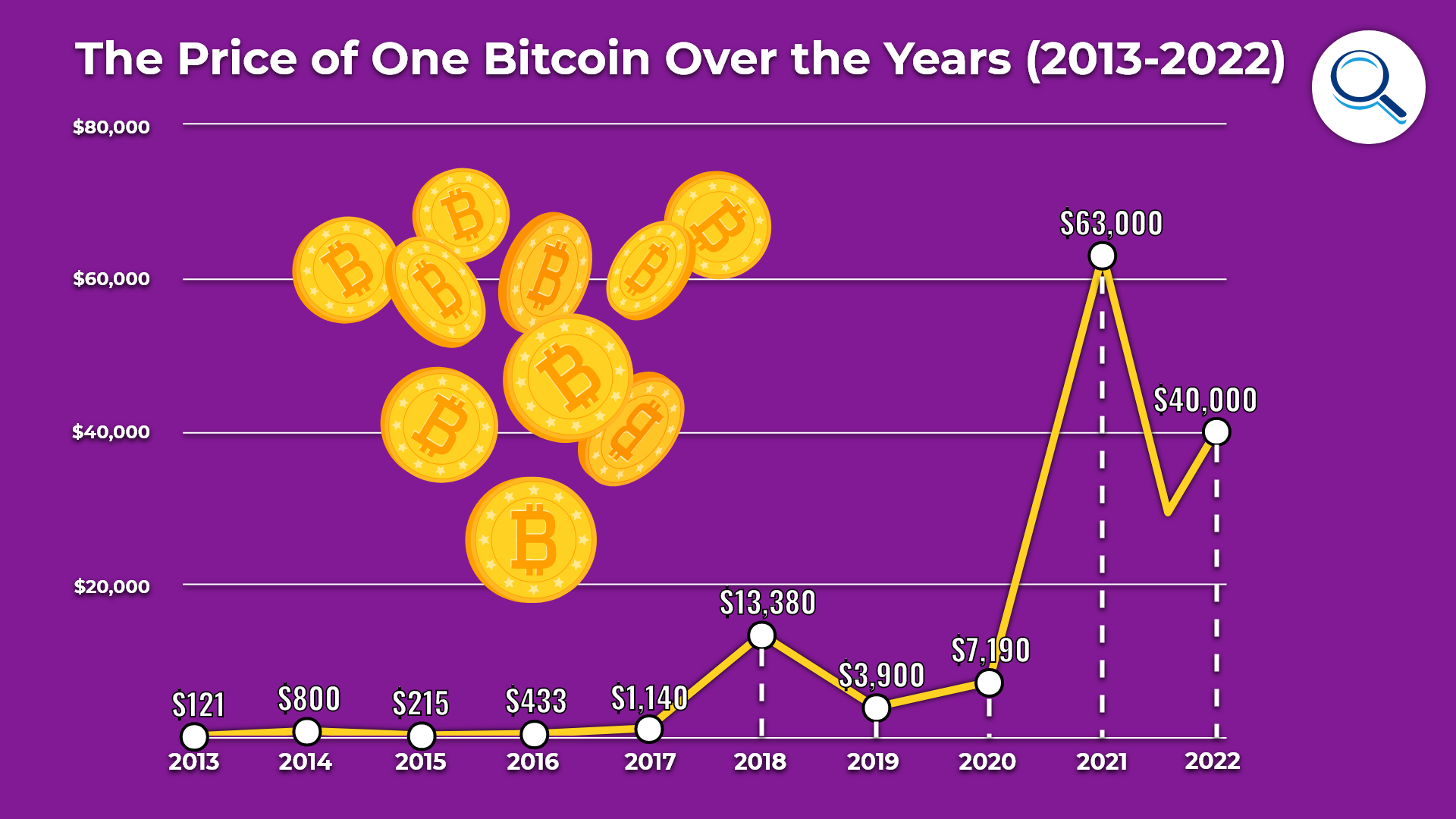 Without getting into the economics of currency, some believe that centralized systems of currency are bad for society. They put tremendous power into the hands of a relatively small group of people – those who control the central bank or have influence over its policy – whose interests are often different from those of the working class.

But there are many reasons why a central bank is important, an example being the Covid-19 pandemic that has plagued the world for the past two-plus years. Central banks all around the world pumped money into economies to keep people afloat while the disease was contained. And while the long-term effects of such a policy are yet to play out, it’s hard to imagine where the world would have gone without this ability to simply “create” money and add it to the economy during hard times, something that is impossible to do with a cryptocurrency.

It's impossible because the technology upon which Bitcoin relies – the blockchain – by design only creates new bitcoins at set intervals, and this process cannot be sped up in any way. The creation of new Bitcoins is slow and gradual, but it's also predictable.

However, the flip side of all of this is that the system is much more secure. No one can perform a transaction without verification by the group – not just one entity. So, while you can't simply "create" currency during a crisis, much of the power associated with currency control erodes when we use a cryptocurrency, which could have a radical impact on societies around the world.

Other Impacts of Bitcoin

Not everyone sees this society-changing future for Bitcoin. Instead, some see it as something that will develop and exist alongside other currencies, including the traditional ones we have now.

For example, Bitcoins, or any other cryptocurrencies, could be used to govern transactions within a group, such as a community, city, business, etc.

Bitcoin has also been considered a tool for economic development in poorer parts of the world since it could help distribute funds to certain groups more easily, specifically when there is a currency exchange involved and the need to engage a bank. It can also provide a means of transacting without having to have "cash," something that can be very useful in poor, rural areas.

Bitcoin, and by extension cryptocurrencies in general, have taken a bit of a reputation hit since they emerged into the mainstream after they were associated with websites such as The Silk Road, which sold all sorts of illicit things, ranging from drugs to body parts.

The marketplace only allowed transactions in Bitcoin due to the cryptocurrency's private and secure nature. When the authorities arrested the person behind it, Bitcoin was forever associated with these types of activity. The public turned slightly against Bitcoin and similar currencies because they saw them as enabling thieves, hackers, and drug dealers, among other things, to operate with anonymity on the internet.

However, the founders of a Bitcoin exchange that faced strong regulation in the wake of The Silk Road scandal were quick to point out that traditional currencies are used for "bad" things all the time, but that didn't make those currencies inherently bad. Yet, to a degree, the damage was already done in the public eye.

Furthermore, Bitcoin's underlying technology – the blockchain – is having its own impact, apart from the one it's having as a result of Bitcoin.

Governments and businesses are now working on implementing blockchain technology into their systems to make them more secure and private. Whether or not this is a good use of this technology is something that's at the crux of the debate about how Bitcoin and other cryptocurrencies will change human society.

What is Bitcoin Mining?

Fundamental to Bitcoin and its underlying blockchain is the process of mining. Bitcoin miners are the ones who verify the transactions conducted using Bitcoin. In doing so, they add another "block" to the chain.

Mining is also responsible for the generation of new Bitcoins; after a certain amount of blocks have been added to the chain, a new Bitcoin is generated and awarded to the miner.

The specifics of how mining works are complicated, but essentially, miners need to provide a 64 hexadecimal number (which means there are 64 digits and each digit could be one of 16 things, leading to trillions of possibilities.)

This number is associated with a transaction and can only be generated through a mathematical computation involving the numbers already stored on the chain. Massive computers try to figure out what this new number is, and the first one to figure it out is the one credited for verifying the transaction. In other words, they get credit towards their next Bitcoin.

If multiple miners arrive at the solution simultaneously, then there is a vote that takes place to determine who gets the credit. Usually, it goes to the miner who has the most transactions already worked.

How Does Bitcoin Mining Work? 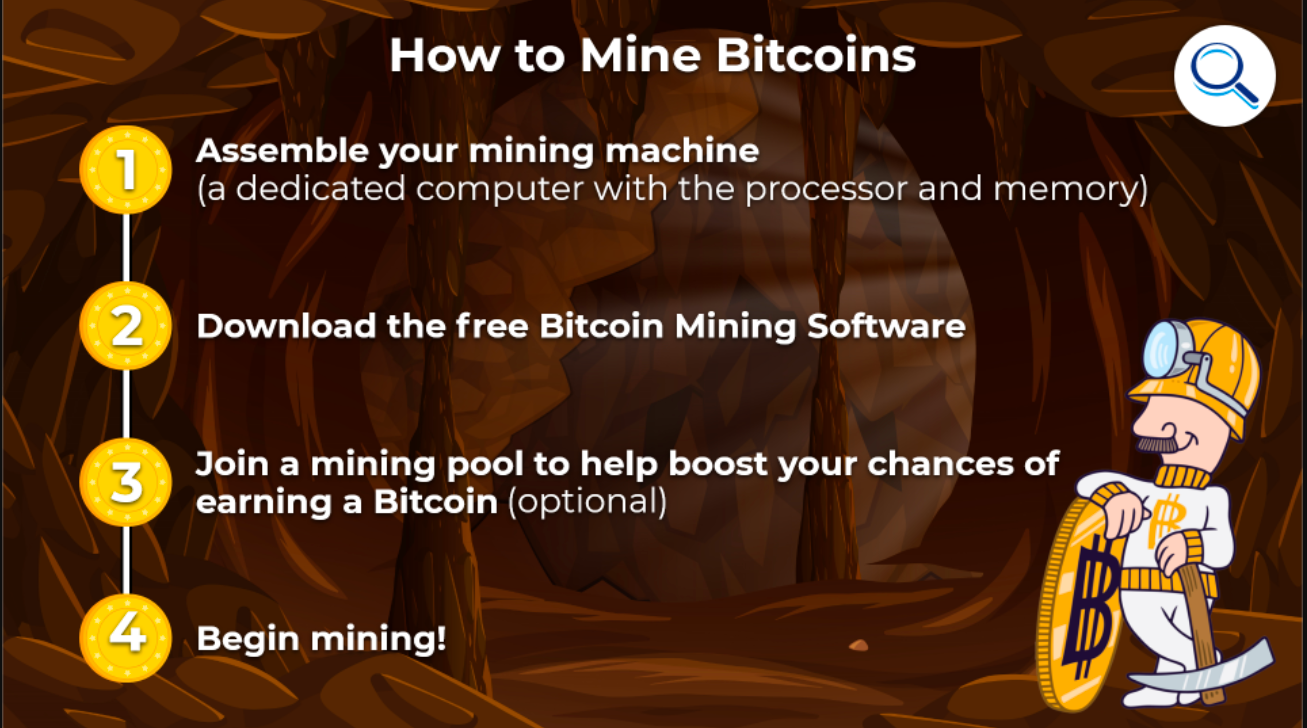 If all of this sounds exciting and interesting to you, it is likely the result of making the connection between how one earns a Bitcoin and how much it's worth (it's like free money!) – perhaps you are considering becoming a Bitcoin miner yourself. If so, know that it is easy in theory, but not really in practice.

A big reason for this is the hardware that you are going to need to mine Bitcoins. The massive amount of computations your computer needs to be able to do in a short period requires a tremendous amount of electricity and computing power, much more than you could ever hope to get with your typical computer.

As a result, if you want to get into Bitcoin, you will need to get the required hardware, which includes specialized chips and processors.

Once you've got this assembled, the next step is easy: simply download the Free Bitcoin Mining program, and you're on your way.

However, if it's just you, the odds are against you for earning a Bitcoin. Mining companies are out there using exponentially more computing power than you and are much more likely to find blocks than you. Since the first one to verify a transaction is the one who gets the Bitcoin, this could leave you with empty pockets for some time.

One thing you can do is join a mining pool, an arrangement in which smaller miners work together to mine blocks, sharing the rewards when they come in. If you are going to try and mine on your own, you'd be wise to join one of these pools. Otherwise, you will spend a fortune and a lifetime mining blocks and may never get even one Bitcoin.

How Much Internet Speed Do You Need for Bitcoin Mining?

One common question people have when they're considering getting into Bitcoin mining is about internet requirements. With so much computing power needed, surely you'd have to have a gigabit-speed (1,000 Mbps) or more connection? How else could you handle so much data?

However, this is actually not true. When Bitcoin mining, you only need an internet connection for data syncing, which requires very little in terms of connection strength and bandwidth.

There have been instances in which systems have mined Bitcoins successfully with as low as ~500 Kbps, which is nothing - dial-up speeds. It's likely most will need a bit more, but in reality, even high-level systems don't need more than 15 Mbps.

So, while Bitcoin technology inherently requires an internet connection, Bitcoin's challenge isn't in satisfying your network but in hardware needs.

How Much Internet Speed do YOU Need?

No matter if you're planning to mine or not, all this talk about hardware and network requirements might make you think about your own internet connection. Maybe you came to this article because you are constantly the victim of a slow internet connection and were wondering if your dream of becoming a Bitcoin miner was even within the realm of possibility. Who can say?

However, internet speed is something we all need but don't all understand. You must know what's going on so that you can be sure you're getting the best bang for your buck.

The first thing you need to know is that internet speed is measured in megabits per second, Mbps. The more, the better, but how much you need depends heavily on how you use the internet. Here's a breakdown: 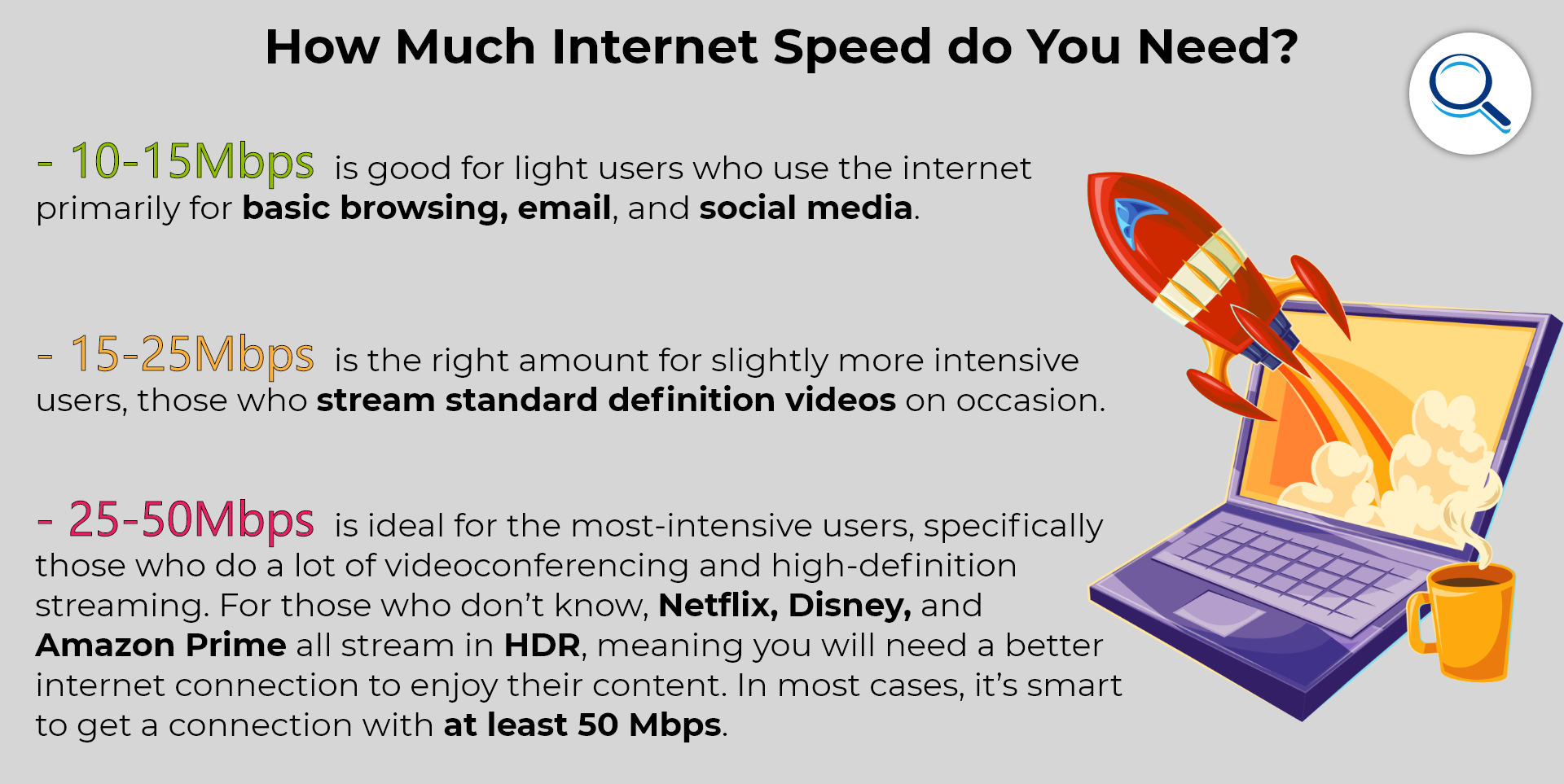 A few things to keep in mind include:

Hopefully, now you understand the basics of Bitcoin and Bitcoin mining, or at least what you need to know to decide if you want to pursue it. Perhaps it's time to set up your own mining operation and begin chasing after those all those precious Bitcoins?