Are you on TikTok?

If you’re under the age of 25, there’s a decent chance the answer is yes. But even if you’re not, the answer might also be yes. The Chinese social media app, also known as Douyin, that lets users create short, 60-second videos and alter them with all sorts of fun special effects, is rapidly taking over the social media scene.

Just a few years ago, it was nothing more than a fun app popular amongst Chinese teens. Now, it is one of the most downloaded apps in the world, making the world’s social media giant — Facebook — look a little more closely in its rearview mirror.

Want to know just how big this TikTok revolution is? Here are ten statistics you must know in 2022.

Although it only launched officially in 2016 and just came to the United States in 2018, TikTok has rapidly become one of the most popular social media websites and apps in the world.

If you count WhatsApp and YouTube as social media sites, then it comes in at number five, though most people leave these two outside of the realm of traditional social media.

To give you an idea of just how popular TikTok is, here is how quickly it has grown in the six years: 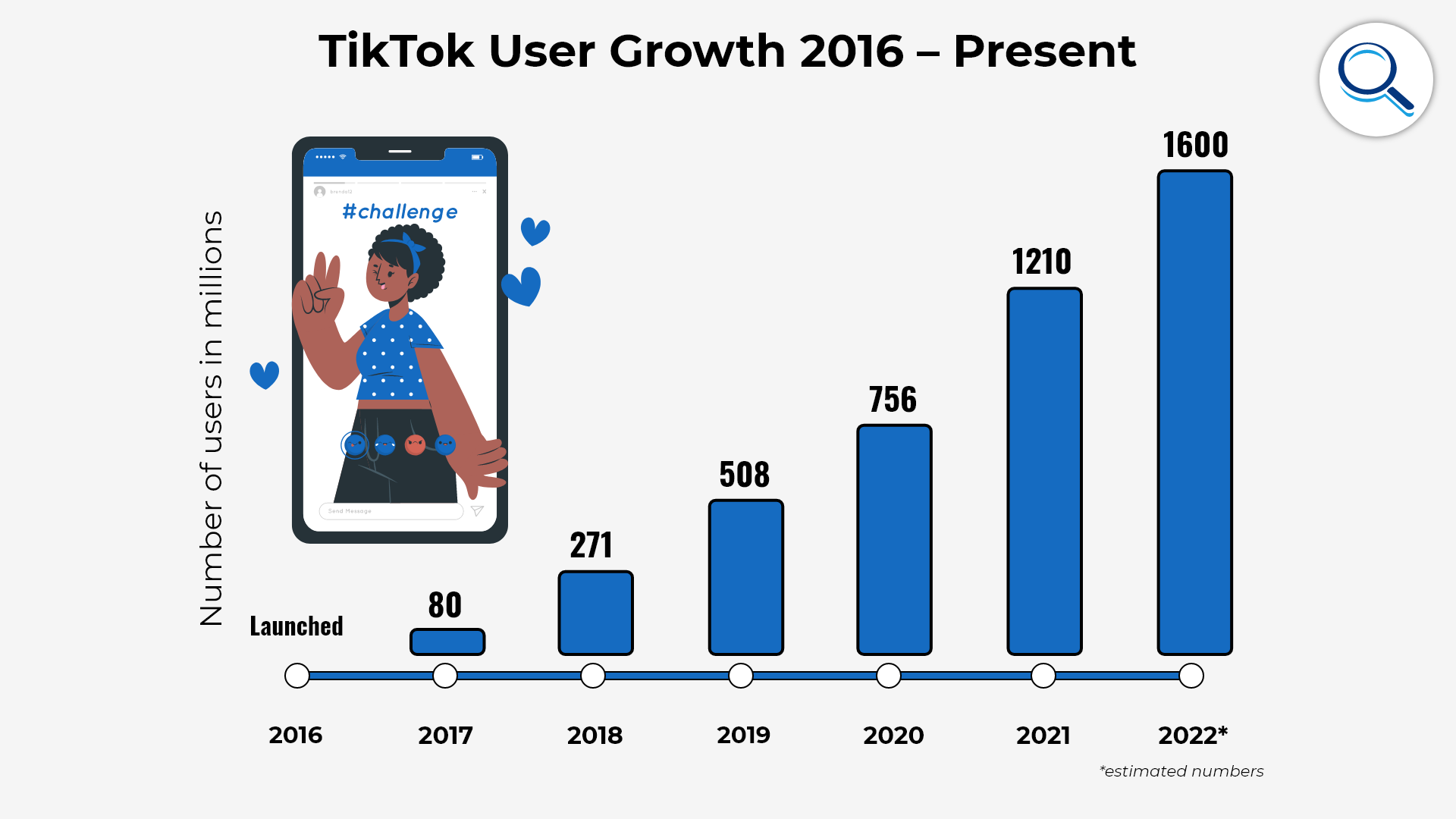 One of the main reasons why TikTok grew so much in 2018 and 2019 was its acquisition of Music.ly, a US-based social media service that already had around 80 million users before it was bought.

After the purchase, TikTok migrated all of these accounts over to its own platform, and this helped launch a revolution in the United States and also made TikTok the first Chinese-based app to be majorly successful in the US.

#2 Close to Half of All TikTok Users are In China

TikTok is originally a Chinese app, and it still gets most of its traffic from Chinese users. In fact, around 600 million of its users come from China, and around one-quarter of the app’s total downloads come from its home country.

In China, the app is referred to as Douyin. The name TikTok was created once the app decided to expand beyond Chinese borders. For the sake of consistency, it has kept this name in its original market.

The popularity of TikTok in China shows the power of the Chinese market, and it also shows the potential Chinese companies have if they can make their products popular and successful outside of China.

In reality, TikTok is just scratching the surface in terms of the number of users available worldwide and could be poised for even more significant growth.

The fact TikTok is Chinese and is so popular there has also made it the center of political controversy. After taking office, President Donald Trump claimed TikTok was an arm of Chinese spy services and moved to have it banned. India has also placed bans on the app several times in response to political disagreements and tensions between the two, to the point where TikTok has abandoned trying to get involved in the Indian market.

What impact politics will ultimately have on TikTok’s future remains to be seen. But the reality is that it is super popular, and this is catching the eye of leaders from many different nations.

Anyone who has ever used TikTok before knows that it can be addicting. Its algorithm has the unique capacity to find videos relevant to you and your interests, and its format of playing video after video keeps you engaged.

This translates to the average user spending around 28 minutes per day on the app or around 850 minutes per month.

To put this in perspective, 850 minutes is equal to 14 hours, which means that most TikTok users spend around 7 days, or one week, each year watching content on TikTok.

Overall, the average person spends around 116 minutes per day on social media, which means TikTok users spend more than half of their social media time on the app. It’s no wonder Facebook is starting to get a little nervous that its stronghold on social media might be coming to an end.

It reached this milestone back in 2021 after averaging around 1 billion downloads per year starting in 2018 after it purchased Music.ly and entered the US market.

Interestingly, TikTok is the first app that is not a game and also not owned by Meta (formerly Facebook) to reach this platform. Yes, you read that right: all four of the most downloaded apps (Facebook, Instagram, WhatsApp, and Messenger) are all owned by one company.

TikTok’s biggest quarters in terms of downloads came at the beginning of 2020, and the COVID-19 pandemic may have had something to do with that. Stuck at home and looking for ways to entertain themselves and connect with others, people turned to TikTok more than ever before. During this period alone, more than 600 million people downloaded the app. Since then, things have returned to normal, with the app averaging around 175-200 million downloads per quarter.

#5 In Any Given Minute, 167 Million TikTok Videos are Being Watched Around the World

Of course, there’s no way to know this exact number. But by looking at the number of videos watched in a year, we can estimate just how many are watched every minute, and that comes out to about 167 million.

That means that, in any given hour, TikTok users watch just a little more than 1 billion videos and around 24 billion in a day.

However, while these numbers might seem shocking (and kind of are), some context is needed. Each video on TikTok is only 30-60 seconds long, and with more than 1 billion users, it’s easy to see how the number of videos watched quickly balloons to astronomical numbers, further proof that TikTok very much is the next internet sensation.

As one of the most popular and fastest-growing apps in the world, it comes as no surprise that TikTok is raking in the cash. Still technically a privately owned company, exact figures are difficult to acquire, but most estimates suggest the app makes around $2 billion per year. Most of this revenue comes from advertising sales, a strategy used by pretty much every other social media app.

Here’s a look at how TikTok revenue has been growing since it first made its way into the mainstream back in 2018: 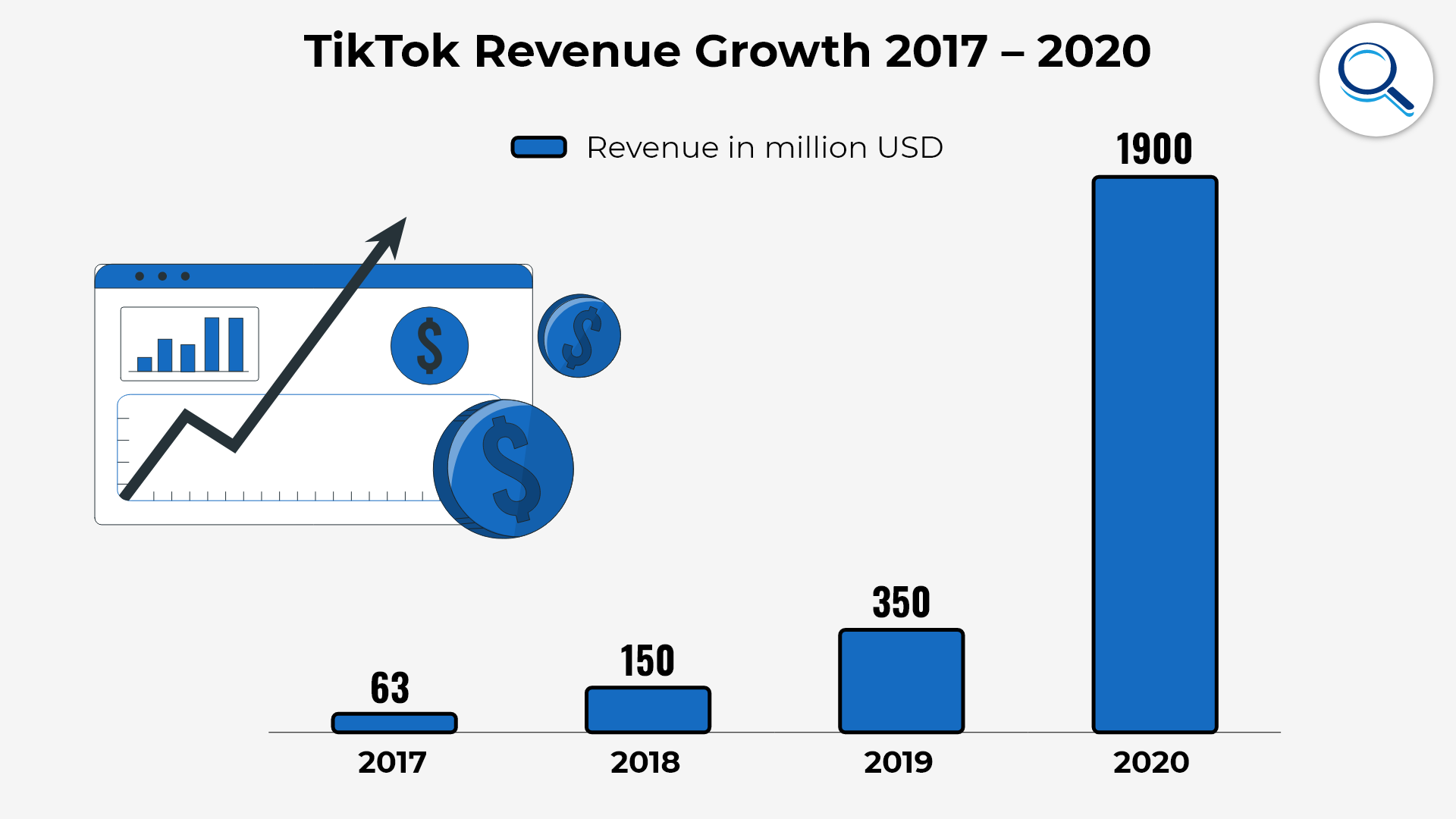 As you can see, TikTok has exploded in just the past two years, increasing its yearly revenue from less than 100 million to nearly 2 billion. And with the app only becoming more popular, these numbers are expected to grow.

This growth, however, is helping out more than just TikTok.

Its parent company, ByteDance, made about $34 billion last year, which was nearly double what it had made the year before. Eventually, the company will likely go public, with current predictions suggesting it is valued at around $180 billion. ByteDance owns several other apps popular in China. But TikTok makes up the bulk of its revenue and is also the only one to see widespread use outside of China.

Whether it opens at that price remains to be seen,  but the fact of the matter is that TikTok’s immense popularity around the world has turned it and its parent company into one of the most valuable private ventures in existence today.

The primary way in which TikTok makes money is through advertising revenue. It sells targeted data to advertisers and makes money based on how often someone clicks on those ads. However, back in 2019, TikTok introduced in-app purchases, which allow users to buy coins and other virtual items that give them special access to content.

While initially just a small portion of the company’s overall revenue, in-app purchases have surged in recent years and topped more than $500 in Q2 2021 alone. Most of these purchases come from the Chinese version of the app, Douyin, but they are quickly becoming an important part of the company’s revenue stream and are a powerful reminder of TikTok’s earning potential.

Currently, in-app purchases are not as popular outside of China. But if that were to change, expect big increases in TikTok revenue in years to come.

Here’s a look at how in-app consumer spending has grown over the years: 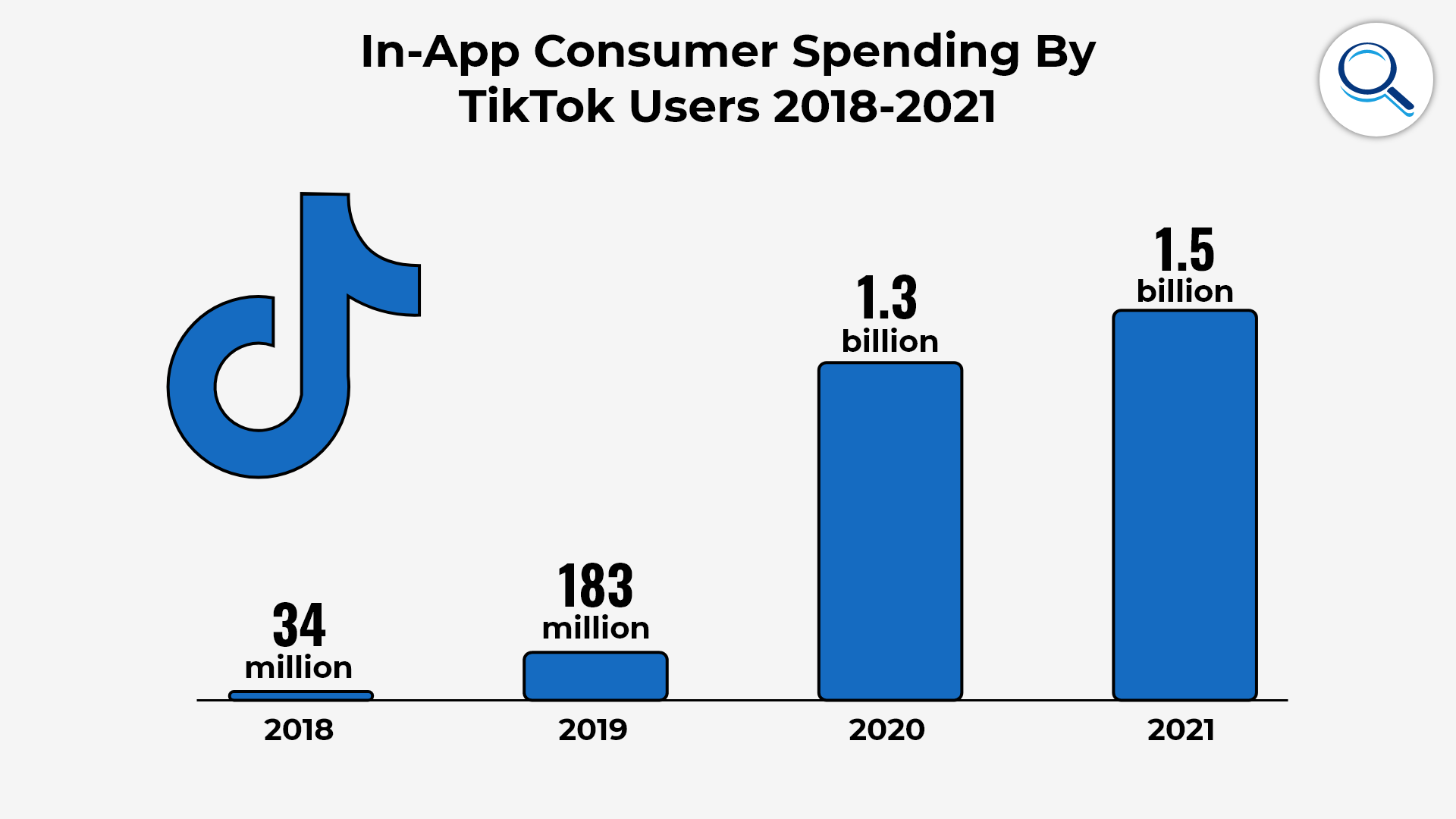 If you find yourself asking, “What’s a TikTok?” don’t be surprised if younger people laugh at you and call you a boomer. But also don’t feel bad. TikTok is very much a GenZ app. Around 35 percent of its users are between 13 and 17-years-old, in other words, middle and high schoolers.

Still, TikTok is very much a young person's app, and this is part of the reason why it has become so popular in the US. Many people from younger generations don’t like Facebook or see it as an app that their parents use. Plus, TikTok is geared towards shorter, quirkier, and more creative videos, which appears to be what the younger generations want more.

Another reason why TikTok is becoming more and more popular is that engagement on the app is much higher than it is with other social media apps. For those who don’t know, engagement refers to when someone likes or shares a post, or when they follow your account after seeing some of your content.

On other social media sites, engagement usually hovers around 3 percent. Anything above this is considered good. But with TikTok, brands are regularly seeing engagement rates of 9 percent, which is virtually unheard of.

A big reason for this is how TikTok is designed. The short videos and the ease of scrolling draw people in more, and it’s also easier to disguise branded content.

These high engagement levels are producing a snowball effect. More brands get involved, which means more content, and with more content comes a wider appeal, which leads to more users and increased popularity.

#10 The Most Followed TikTok Account has Nearly 130 million Followers

One thing TikTok is doing more so than any other social media app (except perhaps YouTube) is turning people into stars. Because of its popularity, and also because of how easy it is to produce content, regular people are quickly becoming superstars on the platform.

However, given how successful some people have been with the app, it’s likely to encourage more and more individuals to download it and try and find their moment in the spotlight, something that can only improve TikTok’s popularity.

Based on these numbers, it’s clear that TikTok is here to stay. This isn’t just some fad that will die out in a few months. Instead, this app is a legitimate player in the world of social media and just might make a run at the top spots currently held by one of Meta’s four companies. But this is also far from a guarantee. Facebook has been at it for much longer, and TikTok does face the challenge of being based in another country. But if the internet world has taught us anything, it’s that things can change on a dime.  It’s a roller coaster and all we can do is hang on tight.